I spent most of the afternoon today "walking the Minden battlefield" and getting the game table and the logistical pieces all set and locked into place.

Each player will have a command of infantry or cavalry and so I put together all of the player aids on clipboards for each command. The clipboards will include a roster sheet of the units in the command, a set of rules, a pencil and 20 D6 dice. There will be four Allied players and five French players.

When the player finds his designated command he will see a hand written set of orders, done in calligraphy, next to his clipboard. The orders are written on parchment paper, then they are folded in half, and then folded in half again. A sticky seal is placed on the envelope to hold the paper folds in place. This is done in lieu of using an envelope because this is probably how a dispatch or a set of orders delivered from the commander would have looked.

The troops are all deployed in their assigned positions, the orders for the day are given, and the game is ready to play on Saturday morning. The following two pictures provide a sense of the vast amount of table space that is available for the game. There are plenty of open flank areas and room for movement. Note that there are three 6ft by 36ft tables, but only two of them are shown in the pictures. 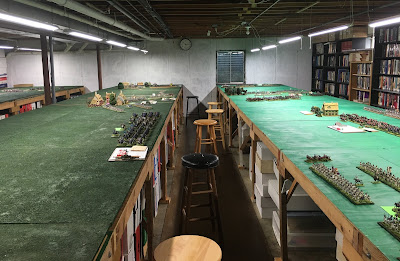 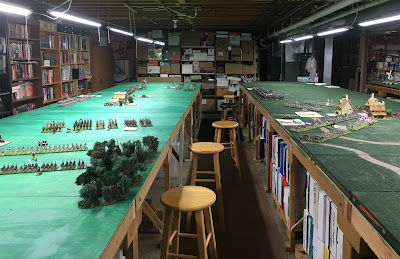 We use cards drawn from a deck to determine movement and fire initiatives. Given the vast amount of table space, we will probably divide the tables into three different zones and  have card decks for each zone. This will speed up the game and allow the players in the particular zones to play at their own pace. For example, if Zone 1 has an extensive melee going on and Zone 3 has finished everything in its turn, then the players in Zone 3 can start a new turn while the Zone 1 players are still hashing out their melee.