I set up another studio of risers using old leather bound books so that I could take some more pictures of some of my favorite sets of Trophy of Wales Miniatures British Army of the 19th Century Colonial period. I rather liked the way that the Dervish pictures turned out in yesterday's post: the patina of the old leather bound books, the dark copper table surface (replaced with a granite countertop today) and some splendid old chaps in red coats with green facings, the 24th Warwickshire Regiment.

I used some architectural books on historic homes and castles in England and Scotland as a backdrop to block out the clutter of a 21st Century home kitchen counter. In the picture above, I like the way the hallway on the right seems to flow naturally into the picture setting, as if the photo shoot was done inside some old country manor house.

Here are a few more of the pictures that I took this evening, all pretty much the same, but the pictures are too good not to post, even if they are a bit redundant. 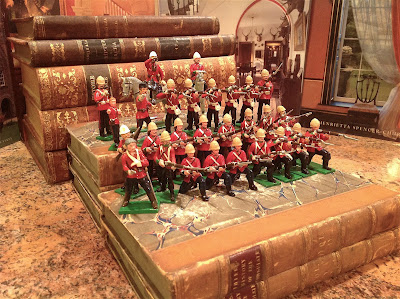 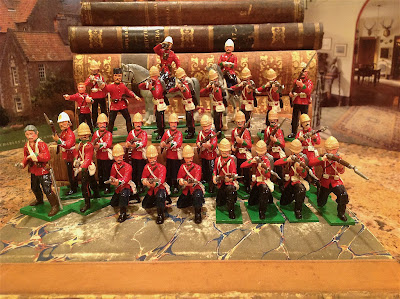 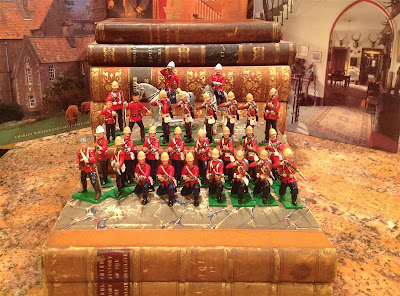 There are 26 foot and 2 mounted officers shown in the pictures above, and I think that I have another 14 more, at least, en route from the figure sellers (bless them!) which will bring the regiment up to 40 foot and 2 officers. I also have some of what I call vignette figures - at least three on hand (one casualty, one wounded and one running with some ammunition or popcorn in his pith helmet).

Several readers have stepped forward and answered my call for reinforcements of the Trophy Miniatures toy soldier collection that I am building up. I want to thank them and encourage others to step forward and let me know if you have any old Trophy toy soldiers that you do not wish to keep. I will gladly add them to my army and pay a good price.

I think that I will have to do a few more of these photo shoots on this stage. Unfortunately, I have to take down all of the back drops and riser books and stash the 24th Foot back on its display shelf, for the photo studio is actual the kitchen counter in our home and Mrs. Fritz needs the space in the morning.

Here is a preview of the next photo shoot: generals and Gatling Guns:

And here is a picture of some new Camel Corps figures that are en route to join the force of Colonel Sinclair at Dongala in the Sudan:


Chin chin, and all that.