Today is the Fourth of July, our most important national holiday in the United States, in which we celebrate the signing of the Declaration of Independence on July 4, 1776. We also call it Independence Day, but maybe it was really the very first Brexit in history. Think about that for a minute.

Fourth of July is celebrated with parades in almost every town and city across the land, followed by cook outs (searing the meat of cows, pigs and sheep on an open charcoal grill), baseball games (The American Sport) and concluding with evening fireworks expositions.

It is also a day when we can get silly and corny.

This year our family decided to be a part of the annual July 4th parade in Lake Bluff, Illinois. We belong to the Union Church of Lake Bluff, a non-denominational church, where things are informal and we just have a darned lot of fun. It is our 150th anniversary as a church this year, so we decided that we would enter a float in this year's parade.

So we decorated a flat bed truck, provided by one of our member, with flags and balloons to get in the spirit of the day. The children got to sit in the back of the truck, where they threw buckets of candy to parade observers along the parade rout. The adults got to carry a banner stating who we were and walk in front of the float.

There were over 100 different parade entries, and this steel band caught my attention as they were warming up across from our starting position on the parade rout.


Here are a couple of pictures of our group setting up the truck with balloons and then carrying our banner in front of the truck. 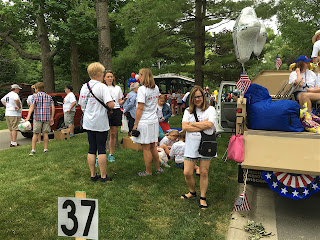 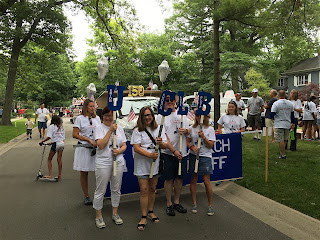 I have watched this parade for nearly 20 years, but this was the first time that I had been a part of the parade. I am so used to sitting on the street curb watching the parade go by and so little did I know how big the throng of parade watchers was. You get a different perspective when you are in the parade and walking past thousands of people dressed in red, white and blue. Everyone is having a party in front of their house along the parade rout. Some of the spreads are quite elaborate including tents with tables full of cakes, lemonade and other goodies to eat.

It is really a sight to behold. It is a little bit corny, but that is one of the things that make America what it is.

I don't have as many pictures as normal, since I was busy walking down the street and waving to the crowd.

We had Highland Pipe Band behind us and only occasionally could I hear them as the parade floats uncoiled from the starting point and started to stretch out onto the streets. I was too busy paying attention to what was going on in front of me so I was very unaware of what might have been going on behind me. It was all over in a flash - much too soon it seemed, but it took about an hour to walk the whole parade rout from start to finish.