We fought our first battle in the Sudan using 54mm toy soldiers for the first time in what proved to be a unique experience for all of us. The large figures provide a new perspective on wargaming that is quite evident in all of the pictures posted on this thread. Please double click each picture to enlarge the view and look at all of the details up close


The British Nile River Column had established a base camp at Dongala on the Nile and had orders to advance on the town of Tokar and capture the water wells at El-Dubie.

I spent several hours the night before cutting up pieces of sticky mounting putty and attaching it to the bottom of many of the figures on the table, but not all of them. The figures were then mounted on temporary MDF wooden bases in groups of 6, 8 or 10 figures in order to reduce the amount of time consumed by moving individual figures all game.

We had problems keeping the horses standing upright throughout the game as the slightest touch seemed to knock them over dominoes style. One of the players stopped trying to pick them up and keep them on their hooves, preferring to lay the horses on their sides on the ground. I need to come up with a solution for mounting the horses to MDF bases for future games.


Early in the game, the British squares were making good progress in their advance on Tokar and the El-Dubie Oasis. With Barlow's square leading the way on the right, and Sinclair's brigade following on the left, in tandem the two brigades could support each other with fire. However, Sinclair got distracted by Beja riflemen and a swarm of Arab desert levies that were piling up casualties on his brigade. So Sinclair stopped the forward movement of his brigade and engaged the Arabs, but in doing so, became separated from Barlow's brigade and could not support Barlow when the Dervish cavalry swarmed all over him. I believe that had Sinclari (me) kept pace with Barlow, then the outcome of the battle could have been quite different.


As it was, Sinclair was busy driving off the Green Banner Desert Arabs, nearly wiping them out, and then a Red Banner of fierce Beja suddenly appeared on this left, while simultaneously, another banner of Arabs suddenly appeared on his right. Sinclair reasoned that if he moved forward to support Barlow, then both brigades could get cut off from the base camp along the Nile.


Bill P. is the owner of the second brigade of British soldiers - I don't recall the name of his brigade commander so I am just going to call the commander Colonel Barlow

Barlow's brigade was overwhelmed by a sudden onrush of Dervish cavalry and foot. The surviving Marines and Sailors fell back from the broken square and attempted (successfully) to form a new rally square.

However, this left the remaining Gordons - only ten of them - to fend for themselves, as they made a heroic last stand in the Oasis of El-Dubie. This reminds me of the last stand at Maiwand. 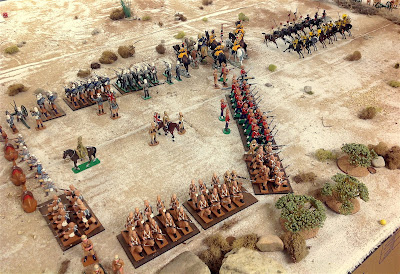 So in the end, it was readily apparent to all that the Dervish had won a convincing victory over the Imperials. One brigade was nearly destroyed and Sinclair had lost almost half of his brigade during the fighting withdrawal back to the camp. Undoubtedly, the newspaper headlines were not going to be kind to General Pettygree and his commanders. One suspects that Fleet Street would play up the heroic Last Stand of the Gordons and celebrate heroes rather than dwell on the loss.

Concluding Thoughts About the Game

We used a Colonial variant of Bill Protz's "Batailles dans l'Ancien Regime" or "BAR" for short. All eight players were familiar with the rules and so the game moved along very smoothly, even with several hundred single figures that had to be moved. I was glad that I had used the adhesive putty to mount a number of Dervish and British figures onto movement bases.


The Dervish started the game with approximately 470 figures versus 248 for the British. There were some comments on TMP and on my blog that the Dervish needed a higher ratio of figures to the British contingent, something like 3 to 1 or higher. This is not the case in BAR though, as the rules produce quick and bloody results, which means that an advantage in the size of forces can result in crushing the opponent with relative ease.

I wiped out the Green Flag command early in the game, and so we recycled that command into the game again. Thus the Dervish added another 50 or so figures to their original number. The British needed all the machine guns and cannon and men that they could get their hands on.

One unusual thing happened to me during the game: all three of my machine guns jammed on the same turn, but then all three jams were cleared on the next turn. Really bad dice were mitigated by really good dice.

Please feel free to leave any comments and thoughts that you might have about this game, as I'd love to hear what you think about it.

It is late at night right now and I have to get to bed, but I have more pictures and need more time to tweak the story a bit more, so come back again tomorrow and catch up on the changes.

We all had a blast playing this game. I bet that I hadn't played a game with toy soldiers since I was about 10 to 12 years old. This was the first time that my collection of 54mm figures had ever been in a battle, so it was fun to see them all fighting it out for the first time.

Rest assured that there will be more toy soldier battles in the future and that Pettygree and Sinclair will march again.

UPDATE
Please check out the Campaigns of Major General Pettygree to find out what happened to Colonel Barlow's brigade at the battle of Tokar:
http://generalpettygree.blogspot.com/2016/07/54mm-battle-of-tokar.html
Posted by Der Alte Fritz at 11:39 PM