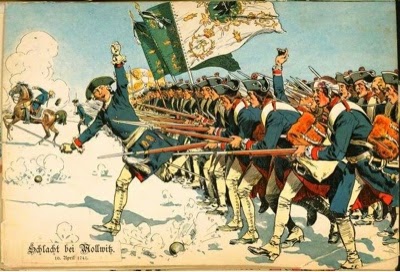 Today is the 274th anniversary of Frederick the Great's first victory of his military career at the Battle of Mollwitz.


Some would say that it was actually Marshall Schwerin's victory since he persuaded young Fritz to go on the lam and flee for his safety when it appeared that the Prussians might lose the battle.
﻿
﻿

Here is a map of the battle, clearly illustrating the pickle that the Prussians found themselves in when their right cavalry wing was outflanked by Romer's Austrian cavalry: 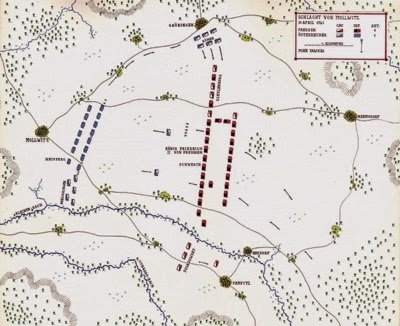 I doubt that there are many cavalry regiments that could stand up to such a disadvantage. Nevertheless, Prussian infantry won the day as two spare battalions of infantry, having nowhere to deploy in the battle lines, fortuitously positioned themselves on the right flank of the army, thereby creating a virtual army square that was cavalry proof.

After fending off th Austrian cavalry attack, the Prussian infantry advanced and mowed down the Austrian infantry in the center. End of battle and an outcome that shocked the Western World: upstart Prussia defeated the mighty Habsburg empire.


Here is a link to a useful site call Obscure Battles that covers Mollwitz and provides a good account of the battle, taken from Duffy's books and from the Robert Asprey book:

Since I already have my winter terrain set out on my game table, I think that I should game Mollwitz over this weekend.