I've been busy working on some painting commissions and I must say that this latest job was a joy to work on. The project was a "Charge" style unit of Prussian musketeers using Minden Miniatures. The client happened to select one of the most colorful regiments in Frederick the Great's army, that of IR18, whose inhaber was usually one of the hereditary princes of the House of Brandenburg. Frederick's brother, August Wilhelm served as inhaber from 1742 to 1758, having died from natural causes. Thereafter, the inhabership fell onto King Frederick's nephew (and son of August Wilhelm), Friedrich Wilhelm, Crown Prince of Prussia (hence the name Prinz von Preussen) and later to be King Friedrich Wilhelm III.

The regiment has color rose or pink facings (lapels, collars and cuffs) and has an unusual distinction of not having red turnbacks - they were rose colored turnbacks to match the facing color.

IR18 was usually a part of the King's army when he was on campaign and was deemed by Frederick to  be one of his best and most dependable regiments.

I painted the grenadier company with powdered hair to make them stand out a little more, as if they needed any more standing out. Their grenadier mitres are certainly spectacular with silver front plates and a rose mitre bag piped in white. I painted different colored sword knots for each of the four companies that the client will use in his Charge organization. This way, he can keep track of which soldier belongs in which company after they get all scrambled up in battle. The bases were not terrained at the client's request, so I merely painted the MDF bases with a coat of Reaper Elven Green paint to give them a more finished look.

Finally, I topped the regiment off with a fine looking pair of flags from GMB Designs. The flags were trimmed and glue applied, then I pressed the halves together and curled the flags using a small dowel rod. The white Elmer's Glue dries quickly and in about 5-10 minutes, the flags had dried and were ready for photographs. I like to curl my flags on a diagonal line running away from the flag staff as this presents a more natural furl of the colors (rather than using a vertical furl, which is almost impossible to achieve in real practice).

Everything is now packed in a box and is ready to be shipped to its new inhaber tomorrow. I have to say that I like the look of this regiment so much that I will have to add an IR18 to my own Minden Prussian army in the future. 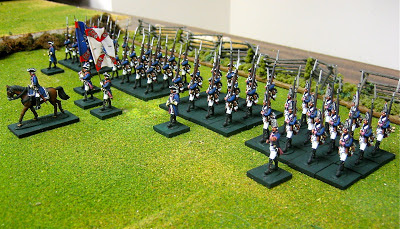