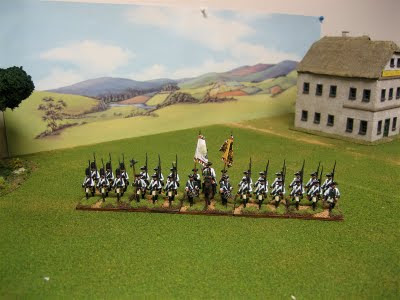 Los Rios Regiment - new battalion headed to the Duchy of Beerstein. Note the new background from Peco, for model railroad layouts. The dreaded blue towel is no gone forever.

I have some quick pictures to post this evening for the benefit of the Duke of Beerstein, who recently augmented his army with several new battalions from the collection of Der Alte Fritz. The unit shown above is the Los Rios Regiment wearing its uniform from the War of Austrian Succession period. However, even though it was supposed to switch to the new 1755 uniform, in all likelihood it retained the WAS uniform until the middle of the SYW. This was a newly painted battalion, whereas the McGuire regiment was an older unit that I simply rebased.

This was an interesting uniform, with a green waistcoat and buff breeches rather than the usual white waistcoat and breeches. It rather stands out from all of the other Austrian units, I think.

I rather enjoyed painting this unit, composed of RSM figures plus some Minden drummers and standard bearers. If you click on the pictures, you can see how the RSM and Minden figures are a perfect match for each other. I don't care for the RSM "drummer boy" or "cadet standard bearer" figures, so I simply replace them with the comparable Minden figures. 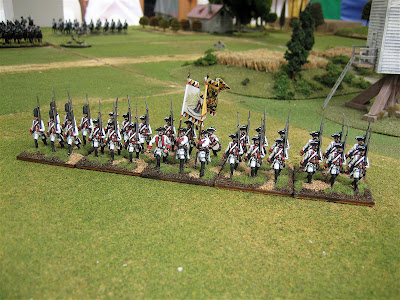 I rebased an existing unit of the McGuire regiment to the Duke's specifications. I had to put the figures into the freezer for about an hour so that I could pry the figures off of the plastic bases that I was using. The Duke uses 2" square bases for his rules (Might & Reason, perhaps?) and these are mounted on Litko bases - a very fine product, by the way.

Tomorrow night I will post some pictures of the field bakery that Ed Phillips made for Randy F. Here is a preview: 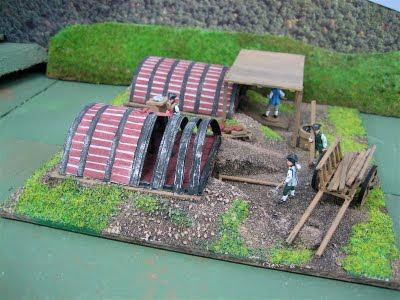 Field bakery built from scratch by Ed Phillips for the collection of Randy Frye. Ed used the Minden pioneer figures for the construction crew as well as the baker, shown in the background shoveling a dough ball into the oven. The oven in the foreground is under construction - a very clever piece of modelling.
Posted by Der Alte Fritz at 12:49 AM