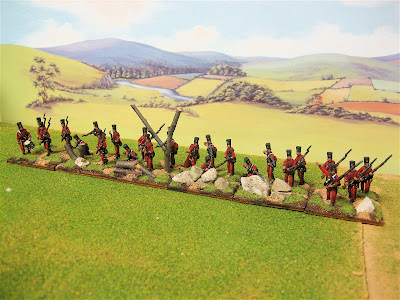 It has been a busy week at Schloss Seewald as I've been searching for a cure for my case of Croat Fever. The only prescription is to paint a bunch of the little fellows, but they have to be Minden Croats. I had enough extra Minden Croats in the Closet O' Lead to start work on a unit of Croats that I was painting on commission for someone in the Imaginations universe of the blogosphere. I must say that I was a little bit jealous, as I had wanted to paint these fellows for my own army, but nevertheless, I proceeded to whip them out within a couple of days.

I have also posted some pictures of the other items that I have been painting for the same client and thought that you would enjoy viewing the pictures. Now that the order backlog has been cleared out (pending the arrival of a new shipment of Minden figures for other orders), I plan to work on some Minden figures for my own collection of Austrians. You guessed it: Croats! I'm working on some Oguliner Croats in Blue coats/vest with red trousers. And some Hungarian infantry too. I am starting a long 4 day weekend, so the prospects of increasing the ranks of my Austrian army look very, very good. 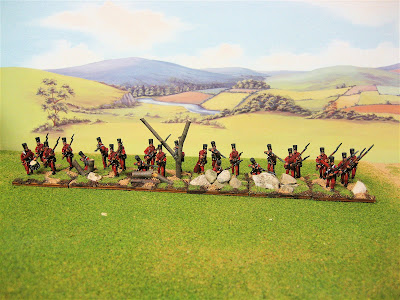 Another view of the same unit, from the front. 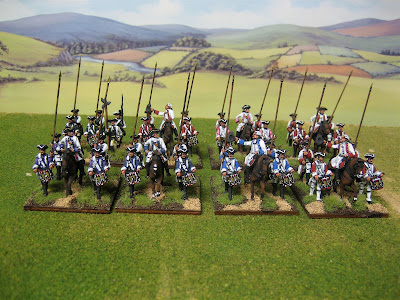 Some command stands, painted on commission, using RSM mounted officers and Minden drummers and standard bearers. As you can see, the two ranges are very compatible. The customer plans on adding his own "imaginations" flags to the units. Thus, he can flag the unit as an Austrian regiment, or by changing command stands, the unit becomes one of the regiments in his fictional country. Kind of clever, don't you think. 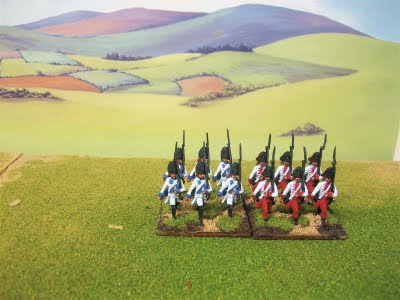 Some RSM grenadiers to fill out the client's battalions. He uses 4 stands of musketeers and 1 stand of grenadiers. The grenadiers can be converged to form a grenadier battalion or they can remain with the parent unit.