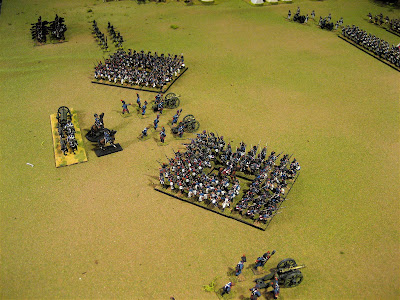 I painted an ungodly number of figures this month: 150 infantry and 51 mounted figures for an Olley Painting Points total of 252 points, or nearly twice as many as I did in May when I logged a seemingly paltry 133 points. I admittedly went way overboard and do not expect to come anywhere near this total every again. I had several advantages, including two weeks of vacation time in June plus a lot of motivation to get some units completed in time for our first BAR Napoleon play test game on July 18th. Still, this is a rediculous number of figures to paint in any month and I thank my family for being understanding during this bout of insanity. 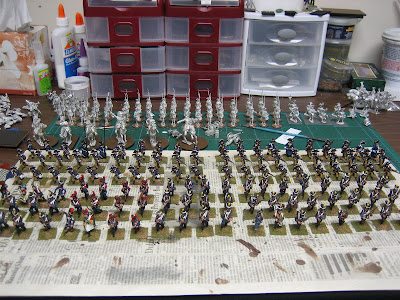 A view of my terraining operations at the end of a session this evening. French Leger infantry from Old Glory (Alsop) in the foreground and Elite 1806 Prussians in firing line in the background. You can also see some command figures that I prepared for priming and a battalion of SYW Minden Austrians.

So here is a brief run down of what I painted in June:

The 1806 Project is coming along nicely. At the end of June I had six battalions of infantry, four 6-pounders (2 foot and 2 horse artillery) and crew, 36 dragoons, 36 cuirassiers, and I'm borrowing 36 Black Hussars from my SYW army.

The French have 3 battalions of infantry (plus Bill's 2 btns), 40 dragoons, 32 cuirassiers, 12 chasseurs and four 8-pounders with crew. 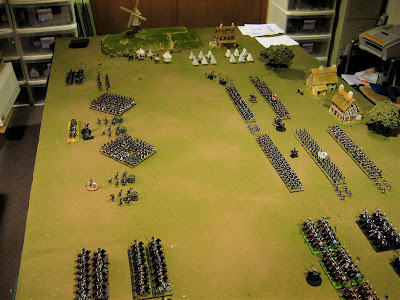 Aerial view of the growing collection of 1806 French and Prussians in Der Alte Fritz's collection.

During July, I hope to complete one more 72 figure French line infantry battalion and another 12-figure squadron of chasseurs.
Posted by Der Alte Fritz at 11:53 PM