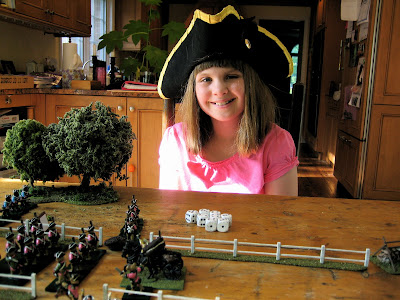 Saturday afternoon Lady Emma Cuddleston-Smythe and Lord Paddington Bear decided that it would be the civilized thing to hold a wargame to see who would get to eat all of the Oreo Biscuits (i.e. Cookies, in Americanese). The winner would take all, so Lord Paddington had no intention of throwing the game - he was hungry and wanted those tasty biscuits. On such things are wars commenced sometimes. 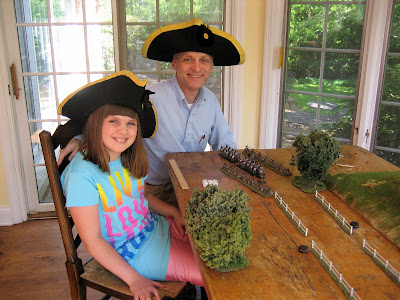 Lady Emma and Lord Paddington mug for the photographers before the commencement of the match. The Pink Bear Army has just entered the table on the road.

The Battle of the Biscuits was loosely based on the Charles Grant "Ambush" scenario. Lady Emma's Pink Bear Army was traveling down the road heading for the safety of the Honey Pot Inn. Lord Paddington Bear's Blue Army was waiting in ambush to attack the Pink Army and take away any biscuits that Lady Emma's foraging party had collected along the way. Mini Oreos were scattered about the tabletop. A bear figure had to move to the biscuit for a turn, and then carry it back to the supply wagon that was coming down the road.

Lord Paddington Bear's Blue army was divided into two groups: there was an ambush group that was waiting in the Ten Acre Woods atop the large ridge that you can see in these pictures. A second party of Blue Bears was assembling in the road at the opposite end of the table, in front of the Honey Pot Inn. They had built up a nice collection of Oreos that they were storing. A third group of Blue Bears were coming back from a foraging expedition near the Inn and would hopefully arrive in time to lend a hand to the defense of the Inn. 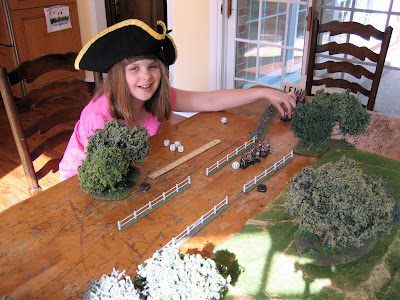 The Pink Army begins its advance down the road. 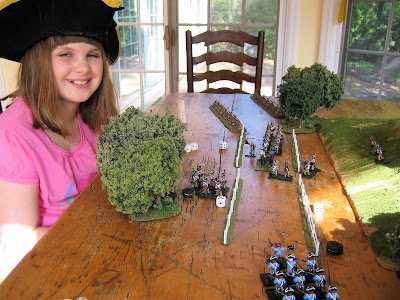 The Pink Army is halfway down the road, sending flankers out to scout the ridge to their left, while another flanking party secures a biscuit near the clump of trees. The first company of Blue Bears advances up the road to contest the grabbing of the biscuits. 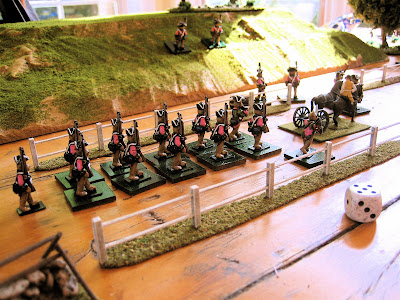 The rear-guard of the Pink Bear Army guards the supply wagon, which will soon be loaded full of biscuits. 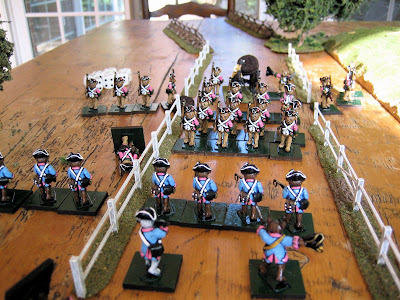 The battle lines are drawn and the firing begins. You can see one downed blue bear in the foreground and one pink bear is also down for the count. A die roll of a "1" or bullseye resulted in a "hit", but this proved to be too hard to hit anything. So Lady Emma decided to resort to the tactic of "melee" instead of using firepower. 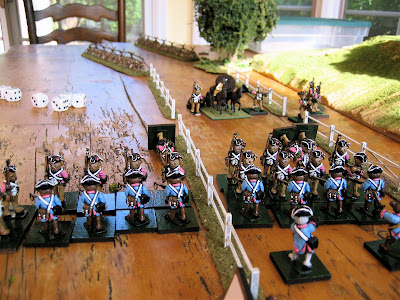 Here is the big melee, which produced quicker results than musketry. 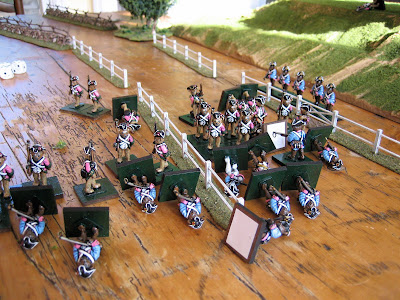 The Pink Bears win the melee quite handily as one lone Blue Bear survives the onslaught and flees back to the Honey Pot Inn. 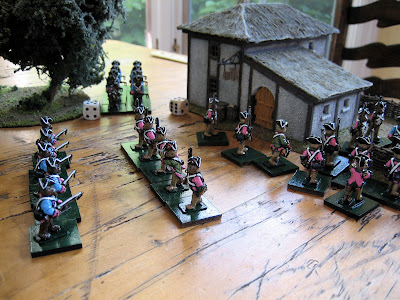 The game ended with Lady Emma knocking down all of the defending Blue Bears in the road and pursuing the sole survivor back to the Honey Pot Inn. There the Pink Bears captured all of the supplies that the Blue Bears had collected. A party of Blue Bears arrived to late to defend the Inn.

As usual, we used the Eureka Teddy Bear figures in our game and we sort of made the rules up on the go. A unit could walk (throw two D6) or run (3 D6) while the wagon could move at 4 D6.

Shooting required that each figure throw a D6 and score a hit on a bullseye ("1") and save on a natural 6. Melees were fought with each bear facing off one on one and rolling D6 to fight. The highest die wins the melee. We allowed bears to gang up on one bear, up to three bears maximum. The single bear had to defeat all three bears with separate die rolls in this instance.