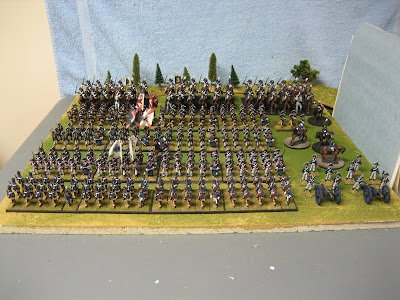 I haven't posted anything since last Sunday for a couple of reasons. First of all, Teddy Bear Wars always seem to generate more traffic and comments than any other topic, so I wanted to keep the adorable bears at the top of the page for the week. I appreciate all of the comments that people have left over the past week. I really enjoy reading what you have to say.

Secondly, Lady Emma was scheduled to have some surgery this week. We were at the pre-op room waiting for the final visit from the surgeon and ready to go, but the surgeon determined that Lady Emma had an infection and so the surgery was too risky until the condition cleared up. That was on Wednesday of this week and we are all kind of in state of mental exhaustion over the "will we or will we not have the surgery" question. It looks like now it will be postponed to later in the summer.

Thirdly, I have been busy painting 1806 Prussians during the month of June and I didn't want to post anything until I had a few of the units completed and based. You can see some of the results in the pictures, above and below. This week alone, I finished a third 12-figure squadron of the Koningen Dragoons (DR5) and 45 more musketeers for IR23 von Winning. This evening, I finished 10 scheutzen (rifle armed skirmishers) and primed some more figures to paint next week. 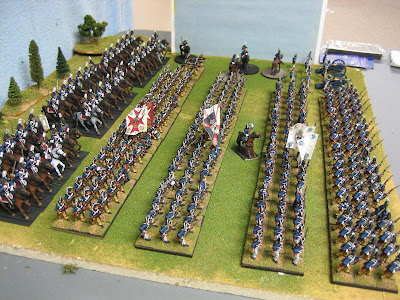 Same brigade, but a view from the left side. Click pix to enlarge.

The pictures above depict four battalions of infantry [IR19 Prinz von Oranien, IR13 von Arnim, IR23 von Winning, and the Knebel Grenadier battalion (19/25)], two 6-pound foot artillery sections, three squadrons of DR5 Koningen Dragoons, and a host of mounted officers. There is a fifth battalion completed, but not yet based (IR24 von Zenge) and a sixth battalion (IR5 von Kleist) that has 30 of the 60 figures completed. The latter two units are not shown in the pictures. I also have 36 converged cuirassiers (3 by 12) that I picked up at Historicon last year. The two cavalry regiments are from Imperialist Miniatures while all of the infantry and artillery is from Elite Miniatures.

My goal was to have six Prussian battalions and two 36-figure cavalry regiments done in time for our first Napoleonic game on July 18th of this year. So with a week and a half to go in the month of June, it looks like I will hit my target for the Prussians for this month. If I have any spare time before the big game, then I will add a unit of French chasseurs a cheval. I plan to use my SYW Black Hussars in the Napoleonic game since some of the Prussian hussars still wore the mirliton in 1806 (although the Black Hussars were switching over to the shako).

I also have two batteries of Foundry 1806 Prussian horse artillery (I'm using Elite's gun models though) and a company of Foundry Jagers on the painting table. So the Napoleonic Project looks like it is on schedule and will be operational (the Death Star is operational) in time for the first play test.
Posted by Der Alte Fritz at 12:50 AM