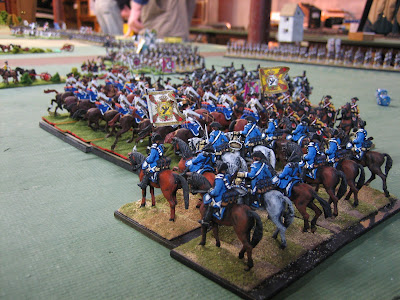 Suren DR2 Jung Krakow dragoons hitting the flank of the French cavalry at the Battle of the Ritterbruck, earlier this year.

Let us go back to a sunny day in November 1757 at the little village of Rossbach, where Frederick the Great administered a big can of whuppin' to the French and Reichsarmee during the battle of the same name. Prior to the battle, Frederick was taking his mid day meal, with some degree of leasure, whilst keeping an eye on the movements of the French. One of his aides was a very excitable subaltern who had been keeping a closer eye on the enemy's movements. His concerns about the enemy march were met with a look of disapproval from the King. A hole was duly cut into the side of the tent so that various officers could have a look. Finally, Colonel von Kliest of the Green Hussars looked, and exclaimed: "that does it; things are getting serious now!"

Well, like von Kliest, I am looking through the window at the upcoming Historicon Convention and thinking that with all of these Jacobite distractions, etc., that time is running short and the convention will soon be upon us. There is much work to be done in Hesse Seewald before I can run my games at Historicon. Things are indeed getting serious and time is running short.

As much as I enjoy painting those wonderful Front Rank Jacobite Rebellion figures, and as much as I would like to keep painting them to the exclusion of everything else, I have decided that it is time to return to the painting of conventional European Seven Year War figures.

DR2 Jung Krakow Dragoons
Speaking of receiving a cans of whuppin', my unfortunate Prussian dragoon regiment No. 2 gets pounded by the French on a regular basis. This is in no small part due to the fact that the French heavy cavalry regiments seem to feel the need to wear a cuirasse beneath their coat. This also gives them an extra pip on the saving throws (i.e. 1s and 2s kill, everything else saves, whereas dragoons require a 4, 5 or 6 to save). Furthermore, DR2 only has 36 figures in the regiment and the weight of numbers by the opposition works against it on the table top.

What is a poor dragoon inhaber to do? Why recruit more troopers, of course. With that in mind, I have been working on another 12-figure squadron of DR2 this week and I expect to have this unit completed within a couple of more days. I am using the Suren/Willie 30mm Prussian Dragoon castings and the Suren W12 Horse casting. The figures have that thin, elegant look to them that der Alte Fritz likes. However, the production moulds are all shot to Heck and so the figures are rather "rough". The hands resemble blobs of lead, or at best, kitchen oven mits, rather than gloved hands. Details on cuffs, cartridge box and other bits of equipment are not well defined. I have the sense that no matter what I do, I can not make these figures look nice.
The figures will look just fine, en masse, but they are not much fun for me to paint. Once this squadron is completed, I will have 4 squadrons of 12 or 48 figures. I have an additional 12 dragoons that may one day be added to the regiment, but for now, I think that I will resist the urge to paint them. The bottom line is that painting has to be an enjoyable thing to do. When the figures take away from that sense of fun and excitement, then the task becomes a chore, rather than a hobby. If I add another dragoon regiment in the future, I will probably use the Crusader SYW Prussian dragoons.
These are clean castings and easy to paint, with minimal preparation work required. The riders fit perfectly with the horses, which is also a big plus.

Austrian Cavalry
My Austrians cavalry suffers from the same lack of numbers that plagues the Prussian dragoons. I am slowly building up each cavalry regiment to at least 48 figures, so that they will be able to hold their own against my Prussian cavalry (at least in theory, mind you). My horse grenadier, Ligne Dragoons and Birkenfeld Cuirassiers are all 36 figure units. So I have to increase the dragoons and cuirassiers to at least 48 figures before July (Historicon). Thus, 12 figure squadrons of dragoons and cuirassiers are forcing their way to the front of the painting que. The dragoons are already primed, so I will tackle them after the DR2 Prussians are finished, and then get to work on the cuirassiers. In my Historicon game I intend to limit the cavalry regiments to 48 figures. I have two Prussian cuirassier regiments that have 60 figures. The Austrian figures are also Crusader and they are easy to paint. And so I am in the unusual position of finding myself enjoying the painting of Austrians more than that of the Prussians. It all has to do with the figures.
Posted by Der Alte Fritz at 5:05 PM