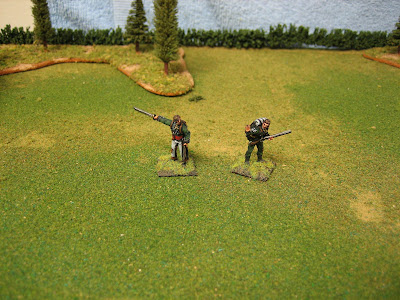 Sharpe (left) and Harper (right) sculpted by the talented Richard Ansell at 1/56 scale. (click on the picture to enlarge the view - it looks even better, trust me)

The other day I received my copy of Sharpe Practice published by the Too Fat Lardies group. These are rules designed for skirmish level gaming during the Napoleonic wars, but are also suitable for games spanning the American Revolution through the mid 19th Century (think of scenarios involving Harry Flashman). As a little bonus, the first 250 people to purchase a copy of the rules also received a figure of Richard Sharpe and Sergeant Patrick Harper (God save Ireland).

I have not had a chance to give the rules much more than a cursory glance, but they look like they will be a lot of fun, and I look forward to painting some more British riflemen and some French voltigeurs so that I can start playing some skirmish games in the Peninsula. A reading of any of the Bernard Cornwell books in the Sharpe series will be chock full of scenario ideas. A number of people on The Miniatures Page have posted after action reports of games using the Sharpe Practice rules, and I have to say that these reports convinced me to hurry up and order a set of the rules. 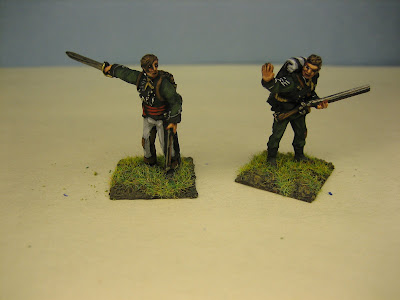 Close up of Sharpe and Harper. Sorry about the darkness of the picture. Click to enlarge, but remember that you will be looking at a blowup that is about 5x the actual size of the figures. I have been experimenting with the use of static grass using the method recommended by Frank Hammond, on his Minden Miniatures web site. Thank you Frank! I really like the way the basing turned out using your technique.

I am really enthused about the two figures that are shown on this page. Sharpe and Harper are sculpted by Richard Ansell, who also made the excellent figures for Minden Miniatures (SYW) and many more figures for The Assault Group ("TAG"). The TAG group includes some stunning 1809 Austrians that will take your breath away, they are that good. Ansell is also sculpting a range of Napoleonic figures for a new company called Alban Miniatures. These will include figures for the Peninsula War and I understand that a fair number of British Rifles are almost ready to hit the market. This is very exciting news, as far as I am concerned. Links are provided below if you would like to see more of Richard Ansell's artistry:

What makes these figures the best on the market today (in my humble opinion)? Well, for starters, the figures actually look like real people, only they happen to be in 1/56 scale (I hope that I have the scale correct). The anatomical proportions are correct so that there are no oversized heads or hands, the figures don't have Conon the Barbarian physiques (Heroic Style?) and they don't look like overfed, overweight soldiers who should be staying home at the depot, rather than in the field on a hard campaign. In addition, the attention to detail on these figures is nothing short of amazing.

In conclusion, I simply think that these are some of the finest figures on the market today and I look forward to the future releases of both the Albion and the TAG ranges of Napoleonic figures.

In The Grand Manner Game Preview
Below is a little preview of the In The Grand Manner Napoleonic game that I played in yesterday, at Keith Leidy's house. Keith now has three 6ft by 28ft tables, parallel to one another. What a joy to have so much maneuvering space, in the same manner as the Wargame Holiday Center in the UK. I will post more pictures tomorrow. 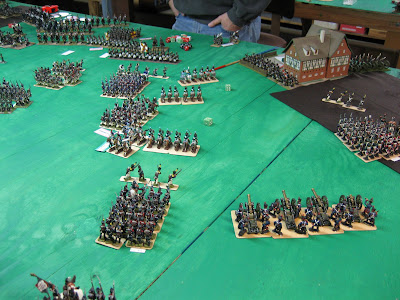 French attack on an important village held by the Russians in the center of the table. Der Alte Fritz (Davout) has been pounding the village with a 12 pounder battery and is now moving the infantry in for the final assault.
Posted by Der Alte Fritz at 12:49 PM