The latest batch of new Minden Miniatures SYW figures includes two personality figures: Prince Ferdinand of Brunswick (commander of the Allied army fighting the French in western Germany) and a dashing looking Croat officer. The new product codes for each figure are PER-017 for Ferdinand and PER-018 for Mr. Croat. The links to the figures in the Fife and Drum Miniatures web store are given below: 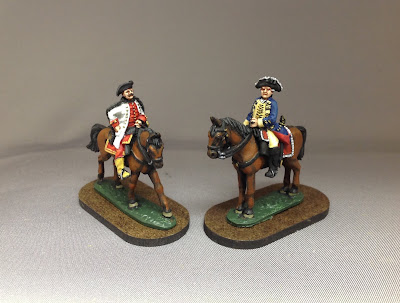 The inspiration for the mounted Croat officer came from a picture in one of the Osprey books that had an image of the Croat wearing his fancy, fur-lined cape. I knew that I really wanted to add this figure to the Minden range. I also felt that I needed a figure to command my Austrian light infantry forces. I could have painted him in the regimental uniform of one of the Croat regiments (red coat, blue coat, brown coat or white coat), but I felt that his station as a brigadier in my army merited the coat of a general Austrian officer.