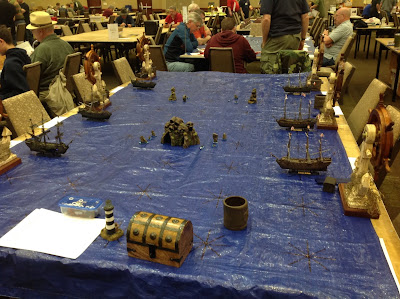 I signed up for two Friday games on Thursday evening using the Little Wars on-line registration. I found it to be easy-peasy to use. It shows you how many tickets are left in the game. Walk up registration was relatively easy too.

My one little nit to pick is that LW ran out of game programs early on Friday and they had to make a run to the printer to have some more made. I finally got my copy late in the afternoon on Friday. A little better planning would have prevented this glitch. Other than that, the convention staff did a really good job of putting on the show.

Here are the pictures that I took of various games at Little Wars on Friday April 26th. I did not go back to LW on Saturday, as I had originally planned, due to the weather forecast of two to five inches of snow coming in that morning and afternoon.


This is a game that I wish that I had played in:

This was probably the most spectacular table terrain that I saw in the convention hall. It looks like it would have been a fun game to play in.


I am looking forward to next year's Little Wars convention. I think that I will run a game or two next year, something that I haven't done at LW in quite some time. The convention looks like it is well-attended and the logistics ran smoothly.