Here are the finished grenadiers from G-II. Note that they have the wider Swedish cuffs and white facings and small clothes to distinguish them from the von Kanitz grenadiers:


And here are the previously painted grenadiers from the von Kanitz musketeer regiment, No. 2, which I painted the week before my trip to the UK last week. The von Kanitz grenadiers wear the tighter Prussian style cuffs and have red facings and straw colored small clothes. 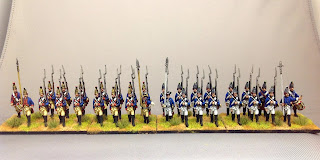 Once I finish two more Prussian battalions and raise the total to 8 battalions, I think that I will stage a refight of the Battle of Gross Jagersdorf (August 30,, 1757) either sooner or on the anniversary day of the battle at the end of August.