Day Four, the Gathering of the Wild Geese 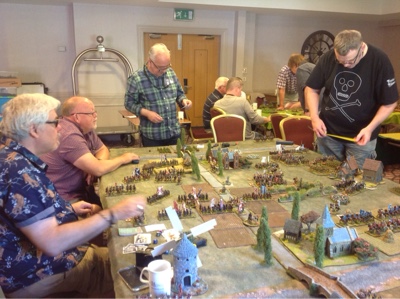 The second annual Wild Geese gathering in Kenilworth convened on Saturday with 23 gamers from all corners of the U.K. Plus one American in the ranks. There were four games set up by Colin Ashton, Paul Robinson, Gary Phillips, and Willz Harley and with three game sessions over the weekend there was oppornity to experience several different historical eras.

Colin's game was set during one of the late 17th Century Wars between the Dutch and the French and it included some role playing elements such that the player on your team might not have your best interests in mind. I really like the sound of this and alas, it was the one game that I did not have the opportunity to play. 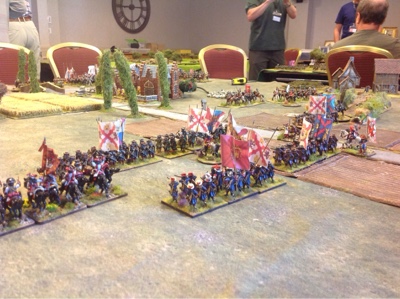 The next game on my list, and first one played, was a GNW period game hosted by the Grimsby Wargamer himself, Paul Robinson. I didn't play in Paul's game last year so I made a point of playing his game this year. The scenario had the Swedes escorting a long wagon train to a Swedish base and the wagon train was intercepted by the Russians. It was a very colorful game that included Polish Hussars, Cossacks, Green coated Russians and blue Swedish coats. 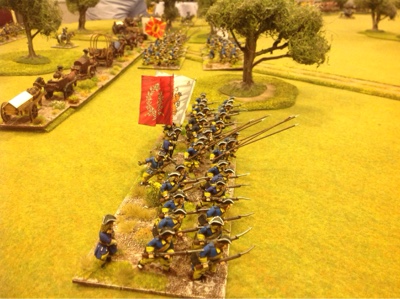 I played one of the Swedish infantry commands serving as the rear guard and faced off against Aly Morrison's Russians. The rules favor Swedish charges and good Russian musketry. I had some initial success routing two Russian battalions off the table, but then that particular Swedish regiment ran out of steam and momentum with it, too, routing away. The rest of my command I could not expand my frontage by more than two regiments whereas Aly overlapped me with a four battalion frontage. So basically I could not use my best asset, the charge, because each of my regiments would have run into two Russian regiments and get overwhelmed by the numbers. Trading musket fire was a bad idea for me due to the numbers ( but just as likely due to the dice gods, who withdrew there favor towards me and shifted it all to Aly). My end of the table was starting to look like a rerun of Poltava somthe Russian victory was more or less inevitable.

I had a blast playing GNW and it reminds me that I have a lot of Swedes and Russians at home that are begging to be painted.

On Saturday afternoon I played in Gary Phillips' Zulu War skirmish game. Gary operated the Zulus and four of us commanded a company or small brigade of British redcoats, some NNC warriors or some Naval Brigade figures. Our mission was to burn down one of the Zulu kraals.

There were no Zulus on the table at the beginning, but there was a chance that a war band might appear any time a British unit moved. So of course we elected to spray the kraal huts with machine gun fire, which technically was not moving. Well after we had our fun and a good snicker , we started to move our commands and so Zulus started popping up in all directions.

Before the game starts, each player rolls dice to create characteristics for each of three units in our command as well as another die roll for The personalities that we had. I can't recall what my characters were, but my commanding officer was a Shirker and was not allowed to advance towards any Zulus. Initially my dice rolling carried over from the GNW and I couldn't shoot down a Zulu if my life depended on it. Ironic.

At one point during the game, my company of engineers was attempting to torch some of the Zulu huts (destroying them was our victory condition) and to my horror a pack of Zulus came storming out of the hut and slaughtered two thirds of The engineers. One of my infantry companies final figured out how to operate a Martini Henry rifle and I felt rather proud when that company put 7 hits on some  charging Zulus. Wait a minute Jim, the Zulus just  killed off 11 of your redcoats. Yikes! The company officer was the lone surviving, choosing not to die gloriously with his mesn
Posted by Der Alte Fritz at 12:39 PM