I am working on the painting of the Manstein Grenadier Battalion (2/G-II) in Marshal Lehwaldt's army at Gross Jagersdorf in 1757. The first half of the battalion consists of the grenadier companies from IR2 von Kanitz regiment. The second half of the battalion will be comprised of the grenadier companies of the second garrison regiment G-II. You put them all together and you end up with a single battalion of Prussian grenadiers.

Click on the link to the Kronoskaf history of the Manstein Grenadiers:

History of the Manstein Grenadiers


Next in the painting queue, naturally, will be the grenadiers from G-II. Here is a picture of the Garrison II regiment's grenadier uniforms from Kronoskaf. 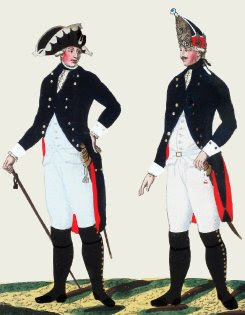 So today, I was ready to paint. I quickly applied the blue coat color, the grey shade for the white breeches and waistcoat, and a shade of red brown as an undercoating for the flesh color. Now I was ready to start on the white cuffs and do you know what happened?

Yes, I had started painting the Prussian grenadier figures with Prussian cuffs instead of the Swedish cuffs. I had picked up the wrong set of figures. Doh! That was two hours of painting time that I had wasted today.

At least I can use the start of the grenadiers in Prussian coats with white small clothes as the grenadiers from IR4 which I can pair with IR16 to create the Polentz grenadier battalion that also fought in Lehwaldt's army.