My goal is to paint enough Austrian and Prussian forces, including units already painted, to host a Battle of Kolin game at the next Seven Years War Association convention on March 30, 31 and April 1st in South Bend, Indiana. Christopher Dufffy will be the guest once again and he plans on giving a talk about the Battle of Kolin. So you can see how my mind is at work on this one.


The Austrian army at Kolin had a contingent of Saxon Cheveauleger cavalry (basically they are dragoons) posted in reserve on the right flank behind the Oak Wood. So I decided that I would need to have several Saxon units to play this role in the game.

After taking a look at the information on the Saxons at the Kronoskaf web site, I decided that the Minden Prussian Dragoons would be acceptable stand ins for Saxon cavalry. With this in mind, I painted three test figures to represent the Prinz Karl, Prinz Albrecht and Graf Bruhl cheveauleger regiments at Kolin.

Here is a picture drawn by Knotel: 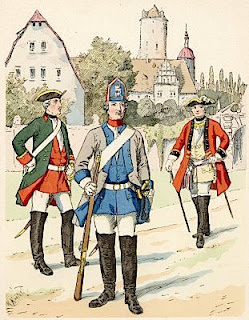 Here are some close up pictures of the individual cavalry figures. I always paint one sample figure of any new unit before painting the whole regiment. I like the way that these Minden Saxons are turning out.