This evening I completed the first of two squadrons that I plan to paint of the Prinz Karl Cheveauleger cavalry regiment in the Saxon army of the SYW. I used Minden Miniatures Prussian dragoons for the Saxons. I usually have two 12-figure squadrons comprising a cavalry regiment in my  organization, or 24 figures to a regiment. Some day I might up the total to three squadrons of 12-figures, or 36 figures. For now though, 24 figures is enough for me. 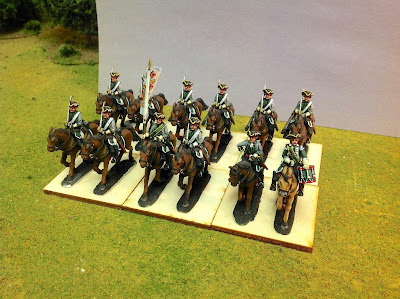 I decided to freehand paint the leibfahne colour for the regiment. I usually use a GMB Designs flag, but they do not make Saxon flags at the moment. Maverick Miniatures in the UK has Saxon flags and will size them for you to fit with any size of wargame figure. I used Dr. Stephen Summerfield's book on the Saxon army for my source of flag information and the Kronoskaf website for the uniform information.


The Graf Bruhl cheveaulegers are next on my painting table and I should have a squadron of them completed later this week.
Posted by Der Alte Fritz at 8:34 PM