I was very pleased to open my e-mail this morning and find my mail box full of pictures of the new greens for the Fife & Drum AWI artillery crews. Each army will have a set of four Firing Crew and four Loading Crew, or 16 new figures in total. Richard Ansell, the sculptor, has once again created superb works of art that really convey the action of the artillery crew in its loading and firing phases.


The greens will be off to Griffin Designs next week to make the master and production moulds for each set, so I would imagine that these figures will be available for sale in June 2012.


And least you were wondering, there will be a complete range of artillery equipment for the AWI in the Fife & Drum range. These are being sculpted as we speak and I am targeting the end of June or early July for the arrival of British, American and French field pieces, limbers and a surprise or two that I think you will really like.


The British "Loading Set" is shown in the two pictures above, front and rear views, for your perusal. Next on stage: the "Firing Set": 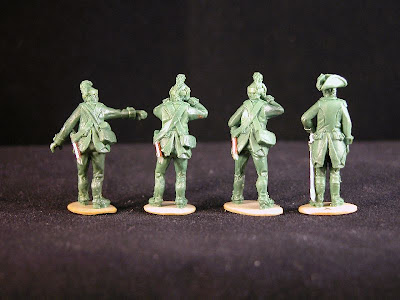 And now, let us take a look at the American or Continental Artillery crews: 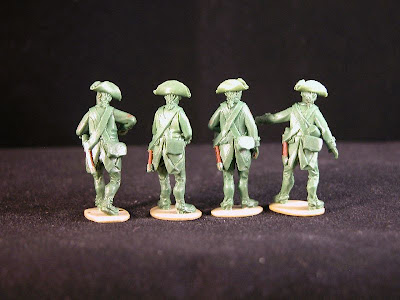 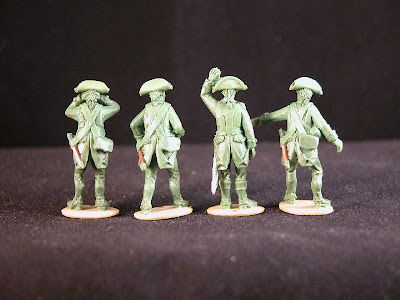 We chose to depict the Continentals wearing overalls (i.e. the ones that look like stirrup pants ) so that they could do double duty as either Continental or British artillery (before the latter ditched their tricorn hats). The crews are cast with open hands so that you can fit in a variety of artillery tools, that come on a separate sprue. See below:

I would imagine that with a little creativity, some of these artillery crew figures could be drafted into your line regiments or command stand vignettes too.


Well, there they are! Let me know what you think by leaving a comment below. If you notice something missing or incorrect, let me know that as well -- Richard says that we have time to make any changes, if required.

As you can see, Fife & Drum is focused on creating a wide range of AWI figures that will include all of the combat arms (infantry, artillery, and cavalry) plus Personality Figures and other Specials. Slowly but surely, and in a very methodical manner, we are providing the wargamer everything that he needs to build American and British armies for the American Revolution.