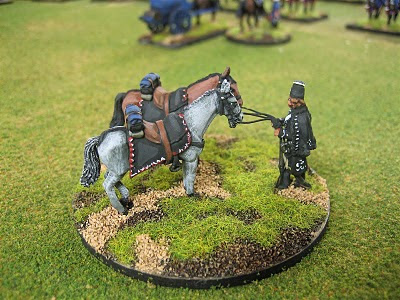 
Since I am no longer a slave to a painting deadline, I decided to work on a couple of vignettes over the weekend. The first is the set of Minden Prussian Hussar Horseholders that I've had sitting on the work bench for awhile. The only conversion work that I had to do was to drill very tiny holes into the muzzle of the two horses, shown above. This would accomodate a short strand of florists' wire that I passed through the holes and into the hands of the hussar, to simulate the reins that he is holding. 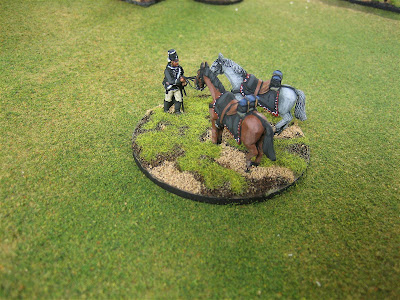 Another, more distant view of the same vignette.


I have a box full of the new dismounted hussars in mirlitons that are winging their way across the Great Pond and should be arriving at any day. I will add the dismounts to my Black Hussar regiment plus a few more horse holder stands that I can set on the table to indicate where the horses are being held while the men skirmish on foot. As I was painting the shabraques, I was having trouble painting the fine white lines of the "Van Dyking" pattern on the saw tooth red edging of the shabraque. Towards the end of the painting session, I hit on the idea of just painting one white dot at the tip of the red tooth rather than attempting to paint in all of the edging. I think it looks better and only wish that I had thought of this before I was half way towards completion of the Van Dyking. I will use this technique on the next batch. 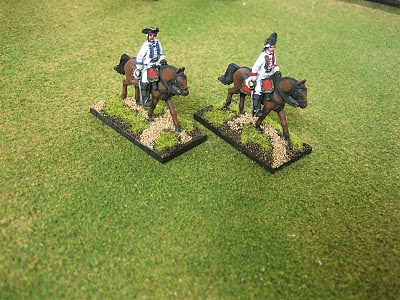 Original Austrian mounted colonel (left) in tricorn and the same figure with a new grenadier head (right). Click pix to enlarge the view.

Out came the Exacto fine tooth hack saw and I immediately set to work in sawing off the head of the mounted infantry colonel figure. Then, I selected the German Grenadier NCO (because it has no musket to interfere with the head removal) and removed his head in the same manner.

The next step was to take a pin vise (a miniature hand drill) and drill a hole in the torso of the mounted officer, where his head had been, and then do the same thing to the grenadier head. Then I found an offcut from North Star wire spear to use as a pin to secure the head to the torso, sized it up and made sure that the new head fit snuggly onto the torso of the officer. I had to do a minor amount of filing under the grenadier head to get a tight fit, but things lined up rather nicely (even the pigtail or que on the back aligned up nicely with the new head). Then a little bit of Zap-A-Gap super glue and I was done. 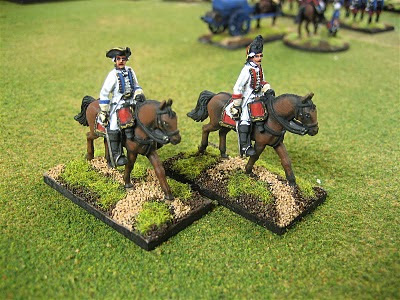 A close up view of the original figure and the converted mounted grenadier officer.

Thank You For All the Kind Comments


I want to thank everyone who left a comment on my last blog post as well as those who sent me e-mails for providing their support for me and my decision to change the focus of my wargame hobby. It is really gratifying to know that I have so many friends out their on the internet and it really helped me to "get out of myself" and let go of the baggage from the past. I felt like a great weight has been removed from my shoulders now that I don't have to burn both ends of the candle trying to get the last figures ready for a game. I feel even better knowing that I do not have to "compete" at a convention in order to derive some fulfillment from this hobby. My fulfillment comes from tinkering in the basement on some new vignette or adding another regiment of infantry or cavalry to my Austrian and Prussian armies and sharing the results with my followers on this blog.

best regards to everyone,