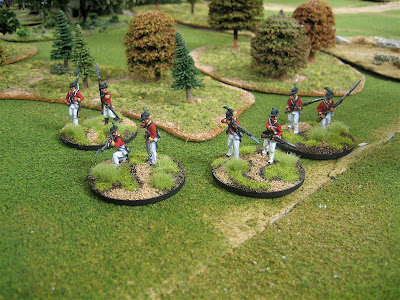 Some of the new Fife & Drum AWI British Light Infantry


I received a couple sets of sample figures of our new Fife & Drum miniatures AWI figures and am posting a couple pictures of the British Light Infantry. These are not ready for production yet, but I thought that everyone would like to see how they look painted.

My first reaction upon painting these was "Sweet Monkeys, but these are nice!"


They are really a joy to paint and I can't wait to get them into production. By the way, Richard Ansell is currently working on some AWI Continentals for us - 13 figures and one standing horse (for the mounted officer). When I look at those redcoats, I can start to envision how this range of figures will look when we have all of the basic combat arms completed and then I can get down to the task of using them in wargames.

Today I was working on painting one each of the AWI American Militia and I expect to have them finished within a couple more days and will probably post some pictures mid week. They look like they could be used in some of the Imaginations armies that people are building all over the world.

After the Continentals are done, we will put the British line infantry and a mounted officer next in the queue. After that, we will focus on the artillery pieces and some crew for each side of the conflict. At that point, we will have the basics into production and then we can go back and add in various other uniform types for both sides. Personally, I'm drooling at the thought of Ansell-sculpted Highlanders one day. 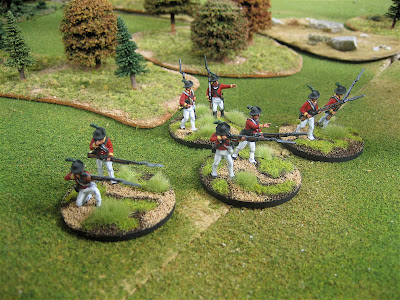 Another closer view of the British light infantry. The fellow kneeling is a little bit out of focus, but I was in a hurry to get some nice piccies up on the blog this evening. I really like the two poses on the second stand from the bottom - standing firing and NCO pointing.

Well that is all that I have for Show & Tell today. I'm sorry that I can not give everyone a date for when we will finally go into production, but I hope that we are ready to go in about another month.

By the way, it seemed like the End of The World today in Hesse Seewald what with the strange weather we have had. It started with torrential rain showers, then a lightening storm, then hail stones the size of ones thumbnail (scary stuff, that). Then that was followed by a short break, which enabled me to dash outside with the dogs before the next wave of storms came in. Then it was pitch black in the middle of the day and more hail. I half expected a cloud of locusts to descend on us next.

Oh well, I have some American Militia waiting for me downstairs at the painting table. So I will see you later.
Posted by Der Alte Fritz at 4:53 PM