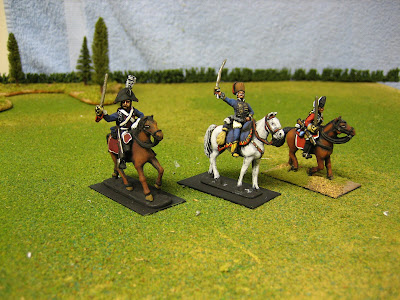 Examples of some recent painting projects (L-R) Imperialist 1806 Prussian dragoons, Stadden SYW Prussian hussars, and Crusader SYW Austrian Horse Grenadiers. The Crusader figure indicates the style of basing that I use on my figures. The other 2 figures have not been based yet.

July Painting Production Is Down
July was not a very productive month for me on the painting table. My production fell to a mere 27 Olley Painting Points for the month. This included 20 French 1806 artillery crew, 4 French guns, and SYW Prussian 12 pounder plus limber plus ammunition wagon. This is far short of my monthly goal of 60 to 72 points, but given that I was tallying over 100 points per month in recent months, the slow down was rather inevitable.

I attribute the painting malaise to a couple of factors including the playing of a couple of games during the month (always a good thing to do), getting ready for Historicon, and focusing too much on the 1806 Napoleonic project. I have noticed that when I get away from my Seven Years War touchstone, that my interest begins to wane. Don't get me wrong, I like the Napoleonic era of history, but painting Napoleonics eventually grinds me down.

I gave myself some time off from painting after returning from Historicon last week. But on Friday, I picked up the brushes again and started working on a batch of 36 SYW Prussian infantry. These are some of my own Potsdam Miniatures and the unit that I chose to paint was IR18 Prinz von Pruessen regiment. They have the typical Prussian infantry uniform, but have rose or pink turnbacks and facings. It was a slow grind at first, but by Saturday I felt as if my painting mojo was coming back. I finished the 36 figures this morning and set to work on the final 24 figures that I will need to complete the battalion.

I do not really need any more Prussian infantry though. This unit will give me 16 battalions once completed. I rather think that 15 battalions is optimal because I can fit 5 battalions into each of my plastic storage cases and 3 or 4 cases is about the maximum number that I can transport in my car trunk (or the boot for those of you in the UK). Afterall, one must save some room for the cavalry, n'est-ce pas?

Painting Service Announcement
Der Alte Fritz occasionally rents out his brush to those who would like to commission some horse and musket wargame units. While my preference is to paint figures in the 18th Century, my expertise spans the Roman Empire through the Sudan Campaign. I am not fond of anything in khaki or post 1900. Feel free to browse through the archives on my blog for examples of my work. I currenlty have openings in my schedule to take on some new painting commissions. If you are interested in some high quality painting work, then drop me a line and we can discuss your project. You can reach me at: altefritz1740@yahoo.com for more information.

Optimal Convention Game Size for BAR rules
After running three games of BAR at Historicon on a 20 foot long table, I have had some time to contemplate on what the optimal size convention game should look like. Time is of the essence in a convention setting, so fewer troops on the table top results in a faster game resolution and more action in the game. Our first game featured 15 battalions, the second game had 12 battalions, and the third game had only 9 battalions. Obviously, the last game was over sooner. As a result, I've concluded that 9 battalions per side is the best number of infantry units to game with in a convention game. This breaks down into three brigades of three battalions plus one artillery piece.

Using the convention that cavalry should represent no more than 25% to 33% of the infantry force, then the correct number of cavalry figures would be three full regiments of 60 figures, or 180 cavalry at the most. For a faster game, I would downsize cavalry regiments to 36 figures and give each side 4 regiments of 36 figures, divided equally on each flank of the army. A lesser number of cavalry figures means that the number of melees is reduced - and melees are the bane of fast moving wargames.

For our homegroup in Milwaukee, we are all familiar with the rules and thus we can handle larger brigades while concluding the game in the same amount of time that we would have for a convention game. The difference, I suppose, is that the home group doesn't have to be taught the rules whereas the convention gamers need a couple of turns to get up to speed.

Getting Ready For the Big OSW Game in October
Last evening I started to jot down some ideas for the terrain and scenario for my annual Old School Wargamers big battalion game, which I will be hosting at the Marriot Lincolnshire Resort, in early October (in the Chicago area). The game date is Saturday October 11, 2008 - although we usually set up the game table the Friday night before and convene at the bar for some socializing and strategery.

Needless to say, thoughts about the forces required for this year's game is focusing my mind on adding a few more units here and there. This also helps to renew my interest in painting again. So it looks like I am breaking out of the malaise and hope to report back with more progress by the end of August.

May your dice always roll high.
Posted by Der Alte Fritz at 3:55 PM