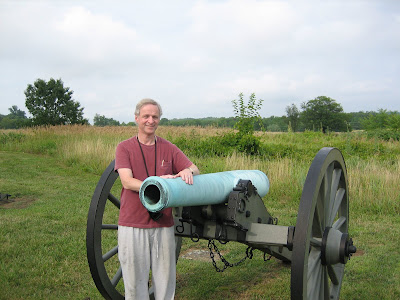 Der Alte Fritz inspects a 12 pound Napoleon atop of Cemetary Ridge near the Angle.

My recent trip to Historicon included a couple of side visits to some of the French & Indian War battle sites in western Pennsylvania and a four hour tour of Gettysburg, before we finished the final leg of our drive from Chicago to Lancaster, Pennsylvania. I hadn't been to Gettysburg for a long time and I was keen to see how things had changed during the interim. A number of nonprofit groups, including The Civil War Preservation Trust and The Friends of the National Park at Gettysburg have done yeoman work in preserving and improving the Gettysburg site over the past four or five years.

One of the "victories" was the felling of the National Tower, that eyesore that used to dominate the landscape. It was purchased by some of these private groups and demolished. Other groups raised and donated money so that a new visitors center could be built, which would include a new home for the Gettysburg Cyclorama. Once these projects are completed, the old visitors center in Ziegler's Grove will be demolished and the site will begin to look more like it did in 1863. Finally, the Park has been cutting down trees and brush that didn't exist at the time of the battle, giving visitors a new perspective on Hood's attack through Devil's Den and Houck's Ridge. 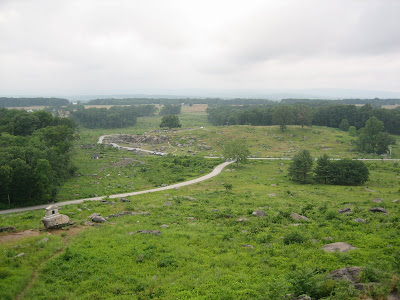 A new view of Houck's Ridge from atop Little Round Top (click picture to enlarge).

The most impressive restoration work is undoubtedly at the site of Devil's Den/Little Round Top/Houck's Ridge. A picture of the site as it presently is is shown above. When I was last in Gettysburg, some 6 or 7 years ago, much of what you see in the picture was covered with woods. My recollection is that there was a substantial woods around Devils Den, but now it is completely open. Now it just looks like a pile of rocks when viewed from Little Round Top. If you click on the picture you will get a very nice view. The little shed (rest rooms/WC) used to be obscured by trees. Everything to the left of the road and beyond Devils Den was a forest of trees.

Moving back into the picture and up the ridge (Houck's Ridge), everything to the left of the lone tree was woods and only the gap between the lone tree and the woods on the right existed. This was the famous view of the triangular field which was attacked by Benning's Brigade of Georgians in Hood's division, leading to the rout of the Union forces from this ridge. Now the visitor can see well beyond the triangular field and can appreciate the view that Major General Warren had when he reached the summit of Little Round Top. Undoubtedly, he could see Hood's whole division coming his way. 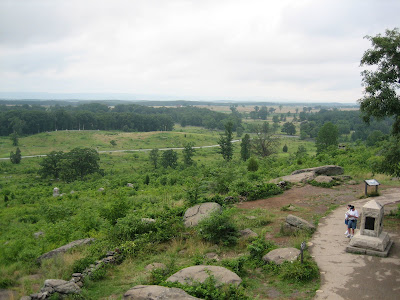 A view of the Valley of Death from atop Little Round Top. The tree line marks the continuation of Houck's Ridge to the north of the previous picture.

I understand that the Peach Orchard has been cut down and replanted with new peach trees. The trees apparently have a 20-year life, so the park replaced them this year. I didn't take any pictures because it was late in the afternoon and my camera was pointing directly into the sun. 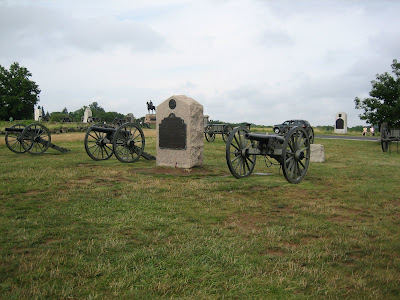 Alonzo Cushing's 'A' Battery 4th US Artillery at the Bloody Angle on Cemetary Ridge.

Finally, here (above) is a picture showing a section of Union artillery at the Angle on Cemetary Ridge. I show this picture because it provides some insight into the amount of space that a battery of artillery requires on the battlefield. Beyond the guns, you can barely make out the limbers. Beyond that, there would be caissons and horse teams taking up even more space. So the depth of a battery is rather significant. That is something to consider when depicting an artillery battery on the table top.
Posted by Der Alte Fritz at 11:53 PM