Return To The Closet O' Lead 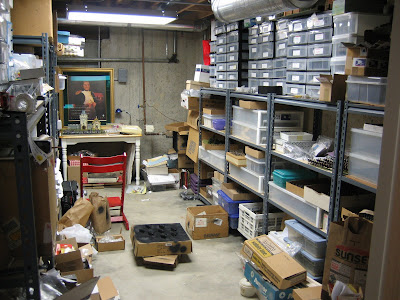 Another look at the Closet O' Lead - in a bit of a mess this time.


It is time for the end of the month accounting of the painting points, and the figures have been tallied and double checked by the accountants, so it looks like Old Fritz racked up 123 Olley Painting Points during the month of June. Let's take a look at what we've accomplished.

Things have taken a decided direction towards Napoleonics, what with 38 SYW points painted and 85 points in the Napoleonic genre. I added 24 more DR2 Jung Krakow Dragoons to my SYW Prussian army - all Suren figures; and 8 more CR13 Garde du Corps Prussian cuirassiers. Those cuirassiers came in mighty handy during our last SYW game in Brown Deer, as they drove off the French light cavalry and gave the French some second thoughts about continuing the cavalry attack in their vicinity. The dragoon still need to have their bases terrained before they bloody their swords at Historicon.

In the Napoleonic genre, Russians seem to have caught my fancy, due in part to my being enamored with those old old Old Glory 1805 Russians that the late Dave Alsop designed. So I painted 36 in shakos and 9 in bicornes. I also painted four sections of Russian horse artillery, using Elite Miniatures (as described in yesterday's post). Finally, I painted 16 Front Rank Old Guard Grenadiers as a painting commission and also completed a mounted colonel of the Guard. The final 2 points were contributed by the one 1806 Prussian dragoon from Imperialist Enterprises. I also primed a 12 figure squadron of these nice dragoons so that I can complete the first squadron at a later date. You can see the figures in the picture above, nicely camouflaged on the black cardboard box sitting in the middle of the floor in my infamous Closet O' Lead.

The photo of the Closet O' Lead provides a better view of the complete room. It is about 30 feet long and maybe 9 feet wide. So there is plenty of room for storage. Things have gotten a bit disheveled and out of order over the past month or two, so I will have to spend some time tidying up and putting things back in their proper place. The picture of Napoleon is actually a poster that my wife picked up at Starbucks several years ago. She thought that it would look nice framed and hanging in my wargame room. It would, but it is huge and I had no spare wall space in the gaming area, so I placed it above my proposed painting table inside the Closet O' Lead. At least that was the plan at one time. 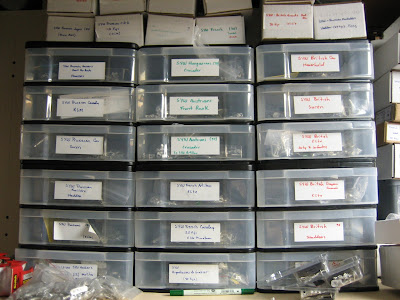 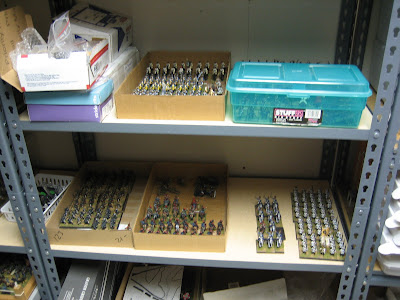 Various figures awaiting storage in some proper containers. If you don't put them away in containers, they have a habit of proliferating and taking up too much storage space. Stacking them in boxes on the shelves allows me to store more figures per shelf. 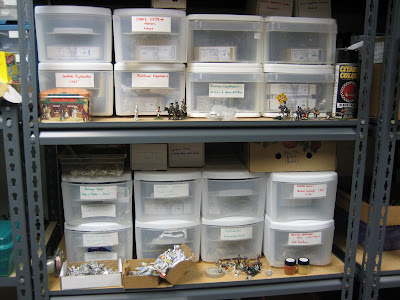 A view of some of the Napoleonic unit storage drawers. The small shoebox sized drawers are for unpainted lead figures. This makes them easier to find when I am looking for a specific unit to paint. If I still kept them in boxes and bags, I would never be able to find them. Armies get stored away in large 3ft long by 18 inch wide white plastic stackable storage drawers. I get these at Bed, Bath & Beyond - the type that are designed to store under a bed, etc.