The Battle of Oberon 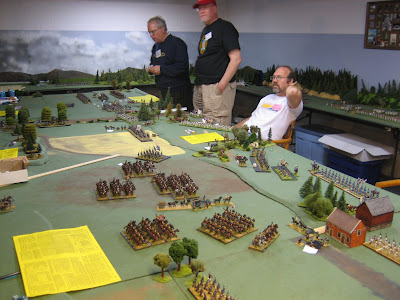 Von Seydlitz leads attacking columns of squadrons into the center of the French line, a la Zorndorf.


On June 7, 2008 gamers from four states converged on Brown Deer, Wisconsin to fight another epic battle in the Wars of the Saxon Duchies. Host Bill Protz staged a morning game featuring the British amphibious landing at Gabrous Bay, outside Louisburg. I arrived late so I have no idea of how the landing fared, but everyone was all smiles when I arrived, so I can only assume that it was a good scenario. The afternoon game was a more traditional Seven Years War era game between the French and the Prussians.


I decided that I wanted to experiment with using heavy cavalry to spear head the attack on infantry, so there wasn't any real strategic purpose to the battle, other than to have fun. Each side had about 12 battalions of infantry and about 300 cavalry figures, give or take a few horses. 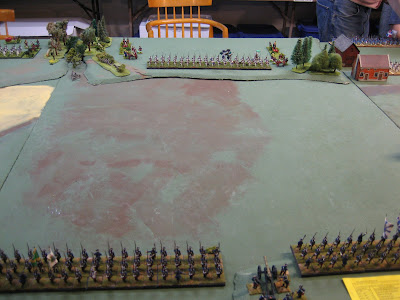 The unlucky French target of the cavalry attack in the center. Two Prussian infantry battalions would screen the advancing Prussian cavalry.

So my plan was to deploy a pair of infantry battalions in the front line, and then line up two heavy cuirassier regiments in a column of squadrons, and then see if I could burst through the French lines with the cavalry, in the manner of von Seydlitz at Kolin and Zorndorf. I ordered the Prussian infantry commander to move forward with all speed and engage the enemy infantry, without regard for what would happen to his battalions. Their purpose was to draw the French battalions' first fire (+5 on the firing charts) after which a veritable tidal wave of cuirassiers would overwhelm them. 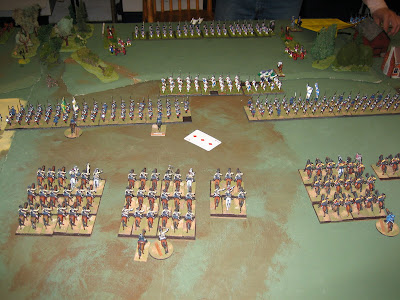 Two Prussian battalions advance toward the ridge in order to draw the French first fire. Cavalry squadrons are moving up in support.

The Prussian infantry commander did his job all too well. As you can see in the picture above, the terrain seemed to limit the French to a frontage of one battalion, whereas the Prussians could move two of their battalions into the same area. Two battalions against one is a rather unfair firefight, so the odds were very much in the Prussians' favor. Add in the fact that the Prussians drew the first fire card, and the results were deadly for the French. The first French battalion was blown away by the musketry of two Prussian battalions. So the French brought up their second line of the Grenadiers de France to plug the gap. 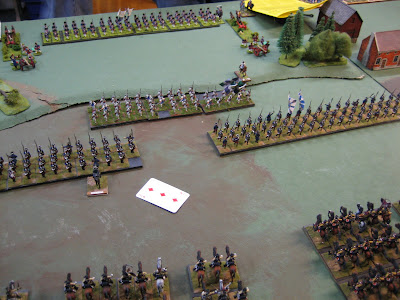 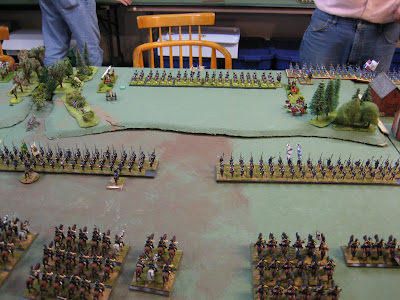 Grenadiers de France plug the gap caused by the destruction of the first French battalion. The light blue coated Royal Deux Pont regiment can be seen in the background side slipping to their right to support the Grenadiers de France.

Those French sent in a 60 figure battalion of grenadiers to plug the gap in their line, but nevertheless, that was not going to stop the Prussian attack. By this point in the game, things were looking very promising for a complete Prussian cavalry break through in the center of the French line. The Prussian infantry battalions were holding their own with minimal casualties so far and the cavalry hadn't been needed so far. 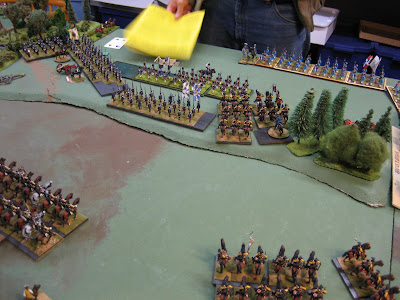 The destruction of the Grenadiers de France by the combined arms infantry and cavalry attack. The Royal Deux Ponts form the third and final line of defense in the French center.

The Prussian battalions of IR25 Kalkstein and IR34 Prinz Ferdinand (Minden Miniatures) were doing most of the heavy work against the Grenadiers de France. At this point, cavalry general von Driessen sent in a squadron of the CR2 Prinz von Preussen (gelbe reiters) cuirassiers to finish off a French artillery battery supporting the Grenadiers. After they rode down the artillerests, they turned into the Grenadiers and routed off a grand division of this battalion. The rest of the unit was being finished off by musketry.

At this point, I had to leave the field of battle to join the Prinzessin von Hesse Seewald for an evening at the opera (to see a chick flic, whose name I shall not mention - oh the humanity of it all!). So I have no idea of how the battle turned out. I yielded command of my cavalry to the plucky Prussian infantry commander in my sector, John Poor and told him what my plans were for the cavalry. If you look at the first picture at the top of this page, you will see the state of forces and their deployment in the center at the time that I had to leave the battle.

Tomorrow, I will post a few of the pictures of the action that took place to my right. Here, the French cavalry seemed to have the same plan as mine, an attack in force on the Prussian infantry. However, they went in without any infantry support and my wingman on the right flank was able to fend off the entire French cavalry command with relative ease.

On the way home from Milwaukee, I had to drive through one of the worst monsoon like thunderstorms that I have ever seen. I was driving on the interstate highway doing a sporty 35 miles per hour and praying to all of the saints that I would make it home safely. Thankfully, I arrived home safe, but mentally drained from the drive. The movie was actually OK, but I would have rather seen the Indiana Jones movie.
Posted by Der Alte Fritz at 8:51 PM