I arrived at the convention venue at the Ramada Inn in South Bend, Indiana Thursday afternoon and found that a number of games were already set up for the next day. I made the rounds and said my hellos to everyone before getting on with the task of unloading game terrain from my car. I was rather surprised by how much space the terrain boxes took up in my vehicle, but then, I always like to bring trees - lots of them. I counted five boxes of trees in my car.

I rarely ever get to play in a game at this convention because I'm either manning my Fife and Drum Miniatures dealer booth or I am hosting several games. This year I left the FD retail merchandise at home and just participated as a game judge. This gave me more time to play in others' games.

Paul Petri was hosting a refight of the Battle of Kolin, with the scenario focusing on the attack of the Prussian advance guard on the Austrian right flank at Krechor. Tom W. commanded Hulsen's forces and captured the village of Krechor from the Croats. This served as a jumping off point for further attacks on the Austrian flank.

We were playing a variant of the Shako rules set and several of the players had some experience with them so this served to move the game along at a fast pace.

I was commanding the center and right flank of the Prussian army, i.e everything else that wasn't in the advance guard. I made some initial headway up the hill as my grenadiers told off some of the Austrian grenadiers that were in front of Hulsen's attack. The rest of that brigade also gained the slope of the Krechor Hill. My initial thought was to refuse, or hold back, the Prussian right wing, but here my uncertainty of the artillery rules made me fearful of marching to the left and potentially presenting my flank to the Austrian artillery that was cited on the hill to my front. I knew that attacking the hill with my right wing was a losing bet, but I did it anyway. I should have stuck with my initial inclination and my knowledge of how Kolin was historically fought. The Austrian artillery proved ineffective at long range so I would have been okay had I continued to march to my left. In these rules, units are not allowed to change formation once they deploy into line formation. So my fate was already decided.

Hoards of Austrians descended down the hill and overwhelmed my right wing with their sheer numerical advantage. My brigade of two battalions had to hold off four Austrian battalions, a battery of artillery, and several regiments of Austrian cavalry. I had neither cavalry nor artillery under my command.

Still, things were going sort of kind of okay as my troops began their ascent of the heights, but then the Dice Gods intervened and my attack went pear shaped and into the dumper. One needs to roll a high number on a D10 die, or even a moderate 3 or 4 on the D10; however, I could roll nothings but 1s and 2s the rest of the evening. My troops began to lose the majority of the firefights and as my casualties increased, so too did the odds of my brigades breaking increase. The picture below gives you an idea of how the Prussian disaster unfolded:

The Prussians got thrashed, but I had fun playing the game and I thought that the rules did a nice job of presenting 18th Century tactics on the battlefield. Those dice though, I could not control.

I joined a small game depicting the British invasion or raid of St. Cast in France during the SYW. The Right Honorable John The OFM was one of my opponents on the other side of the table. Eric T. and I commanded the British infantry and our task was to evacuate as many troops as we could before the French overwhelmed the beach property. It was a small four player game and I think that we were finished in little more than an hour.

The British won by the skin of their teeth, due in no part to my horrible dice rolling. My first couple of die rolls were good, but after that it was a steady heaping helping of snakes eyes for the rest of the game.

Here are some pictures of several of the other games that were going on during the convention.

My Croat Terror War Games on Friday and Saturday

I ran two Croat Terror SYW skirmish level games over the two day convention. The scenario featured the Croats staging a raid on a Prussian field bakery somewhere in Silesia during the SYW. The Austrian raiding party included two units of Croat infantry, one Austrian musketeer and one Austrian grenadier units for a total of four combat units. Each unit consisted of 24 figures spread out over two twelve-figure movement trays from Litko Bases. The figures are individually based on 25mm round discs that fit snuggly in the movement tray. The Prussians had a similar force of one Jager, one dismounted hussar unit, some freikorps troops, and one 12-figure stand each of Prussian musketeers and grenadiers. The Prussians also had two 12-pound cannon sited in some field works.

The next two pictures show the entire game table, first from one end to the other end: 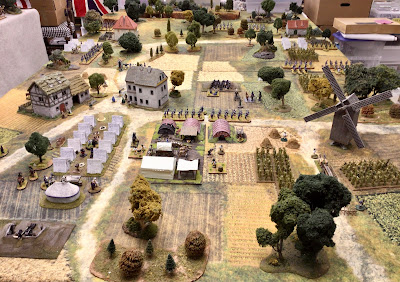 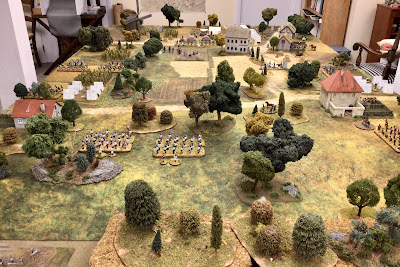 I have been using the Cigar Box Battle Mats for my convention games for a couple of years now and I think that this product is the best in the business. The mats are printed on a chennile cloth material that drapes elegantly over the table top with printed on wheat and corn fields, roads, plowed fields and grass lands. One can place pieces of foam board under the mat to create contours, which look very natural once the mat is laid over the top. Then I spruce up the appearance by placing my own buildings, trees and other bits of terrain on top of the cloth mat. You don't like where a cornfield is printed on your mat? No problem. Just cover the area with a clump of trees or a building. You don't like being fixed with the same road network in game after game? Again, these are easily covered over with other terrain bits and pieces and I can lay down my own roads anywhere on the table to suit my particular game needs.

The Saturday game was played on the horizontal axis of the table. I placed the bread ovens in the center of the table rather than at one of the ends of the table. This placement gave the Austrians a better chance of actually making it into the camp before their units were shot to pieces. Playing on the horizontal axis also created more playing space on the flanks and averted the troop traffic jam that occurred during the Friday game, which was played vertically.  This time the Austrians had an easier time, although still difficult, of reaching the Prussian camp and setting fire to two of the three bread ovens, resulting in an Austrian victory.

This change made a world of difference in the spacing and playability of the game and I will play it this way when I run the game again at the HMGS Midwest Little Wars Convention April 21 - 24, 2022 in Lisle, Illinois at the Sheridan-Naperville/Lisle Hotel. 3000 Warrenville Road, Lisle, IL

A Note About All of These Field Bakeries These Days
You might have noticed that there are more and more sightings of field bakeries on SYW era game tables these days, and you might be wondering how this all came about. You may hear several different versions of how this trend got started, but trust me, I know the true answer and don't let anyone tell you otherwise.
In 1994 the Seven Years War Association members conducted the very first Christopher Duffy Tour of Frederician Battlefields. Whilst we were traveling across the bucolic Silesian landscape, there were a number of instances where the topic of field bakeries came up. In fact, it was Ken Bunger who first asked "why doesn't anyone do a wargame involving a small raid on a field bakery?"
Not long after, Ed Phillips made several models of Prussian or Austrian field bakeries, of which you can see in some of these pictures. Ed did some extensive research on the topic and found some period drawings of field bakeries in one of the German state archives. There were already some models made by several of the German "flats" producers that Ed could draw on to make his models.
Ken and I both started creating small actions on the table top that focused on a raid on the field bakery. I have continued to do so to this very day.
Somewhere along the line, a German company, Black Hussar Miniatures, produced a resin plastic model of a Prussian field bakery as well as a range of field bakery workers and these are truly marvelous terrain pieces and vignettes. One no longer needs to have modeling skills to scratch build a field bakery because you can easily buy and paint the Black Hussar version. Since then, I have seen a number of Black Hussar and scratch built field bakeries popping up in the various war game magazines and in pictures taken at various UK based wargame shows.
A good idea is a good idea regardless of its origin and so I am glad to see that Ken's kernel of an idea has made it to the table top in a number of venues and publications. I just thought that you should know the story of how it all began.
I will see you at Little Wars on April 21-24, 2022. I will be running my Bread and Croats game on Friday at 1PM and on Saturday at 1PM. If you plan on being in the area on those days, then why not go to the Little Wars game sign up site and reserve your spot in my game.
Cheers,
Fritz
Posted by Der Alte Fritz at 3:39 PM