I finished painting samples of the new Minden Miniatures Prussian Hussars wearing mirliton hats. The new figures are all in a more relaxed pose with shouldered sword and on a new walking hussar horse, also added to the range. Now you can have your Prussian hussars in a very animated charging pose, or in the more relaxed shouldered sword pose.

The painted samples represent the Malachowski Hussar Regiment (H7). The regiment was one of those extra large 10-squadron cavalry regiments in the Prussian cavalry establishment. During the SYW, Frederick II loaned three squadrons of H7 to Prince Ferdinand's army in Hanover. Two squadrons of the Black Hussars (H5) were also detached to Prince Ferdinand. 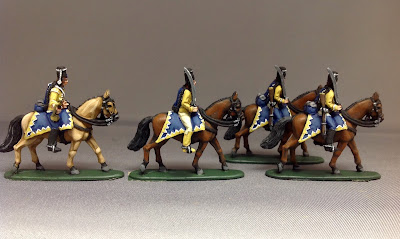 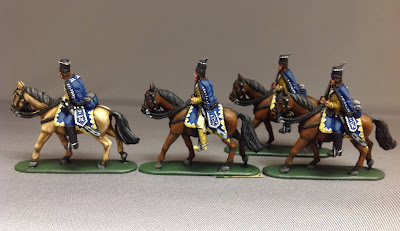 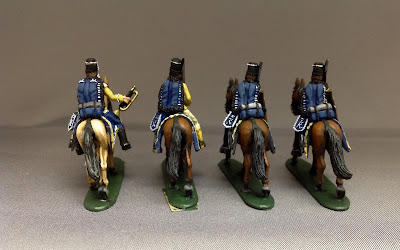 The new product codes for these figures are:

We also have the same figures, wearing fur busby hats under the following product codes:

Many people feel that painting hussars of any kind is difficult due to the amount of lace on their uniforms. The sculptor, Richard Ansell, has made these hussars easier to paint by including raised detail on the figure's shabraque, dolman and pelisse.

For example, the jagged saw-tooth lace (or "van dyking" pattern) on the shabraque is made easier to paint because the van dyking is a raised detail - you don't have to paint your own van dyke pattern because it is already sculpted onto the shabraque. The sabertache, which hangs off of the waist of the hussar, has the royal cypher of King Frederick Rex engraved on the item. One could lightly dry brush over the surface to pick out the details of the royal cypher. This is much easier than having to freehand paint the "FR" initials and the crown onto the sabertache.

The payback for the amount of time spent on painting these new hussar figures is very high, as you can see from the pictures of the samples that I painted.
Posted by Der Alte Fritz at 1:49 AM