I made this French SYW artillery vignette several years ago to use as a display piece for my trade booth for Fife & Drum Miniatures.

The artillery caison is the AE-045 Russian 4-wheel ammo wagon, which is suitable for any country, point in fact.  I now wish that I had included a pair of limbers behind the wagon along with various workers, but obviously the wooden base was not large enough to accomodate more figures. However, it is something that I might do in the future. I could also make additional display dioramas for some of the other Minden and Fife and Drum Miniatures figures. 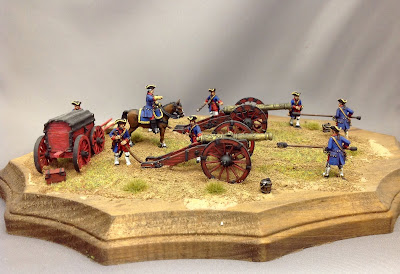 The figures did not require any conversion, other than the extra long rammers that I gave to the two gentlemen pushing the sabots down the barrel. The longer barrelled guns, of course, would have had longer rammers and the ones that come with the artillery tools were not adequate. So what I did was to take some wire and then make the sponge and rammer tips out of green epoxy putty, which is a fairly simple exercise that anyone can do. Water buckets from the artillery tools sprue were placed beside the cannon and a couple of spare ammo chests were placed on the ground near the wagon. 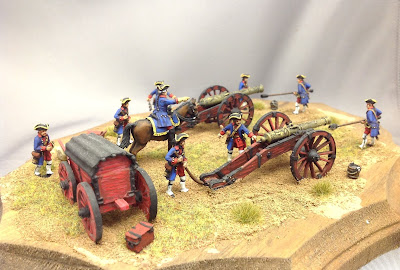 The wood base was purchase at Michael's Stores ( a craft goods retail store) and stained with a walnut brown stain. I troweled a light amount of wallboard paste (Red Devil Pre-mixed Spackle Compound) across the base and then sprinkled some extra-fine railroad ballast onto the spackle while it was still wet. After it dried, in about 3-4 hours, I added a few tufts and some static grass to complete the ground terrain. 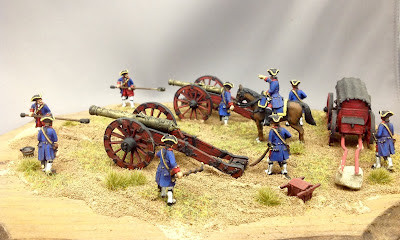 Let me know what you think in the comments section below. Should I create more SYW dioramas?
Posted by Der Alte Fritz at 11:31 AM