I finished the basing of my newest Austrian infantry battalion for my War of the Austrian Succession project. It is the Sprecher regiment, later known as the Lacy regiment during the SYW. The battalion had been sitting in the area where I do all of my basing and terraining for several weeks, but on Monday of this week I finally found some time to add the grass and finish the bases.

If you click on any of the pictures to enlarge them, you can probably guess why I chose this particular regiment to paint. It is the only regiment that used a two-color uniform combination - red facings (turnbacsk, cuffs and lapels) with dark blue waistcoat, making it a very unique looking regiment. This uniform was worn during the first couple of year of the SYW (1756 and 1757). By 1758 the regiment had gone through several inhabers and now wore a fairly standard uniform with red cuffs and lapels, but a white waistcoats and white turnbacks.


As with the other Austrian regiments in my WAS Project (now that it is an official project, it should have capital letters instead of common lower-case letters), there are 40-42 figures in the battalion based on five stands that give the unit a symetrical look. This unit has three 8-figure stands and two 9-figure stands. This give me the option of removing one of the 9-figure stands, reducing the battalion to 33 figures, which puts it on par with my 32-figure Prussians and Russians.


The WAS organization of my forces places most of the rank and file soldiers and the command stand figures in the front two ranks. The base is 60mm by 80mm deep. The frontage matches that of my Russian and Prussian new battalions.

I then add a sort of third rank consisting of a drummer at the end of each flank of the battalion plus either an NCO or an officer in the rear behind the rank and file soldiers.

The two pictures below provide a good look at the sort of three rank basing system. 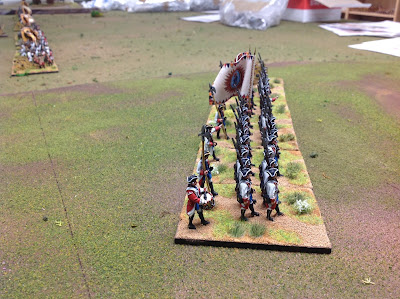 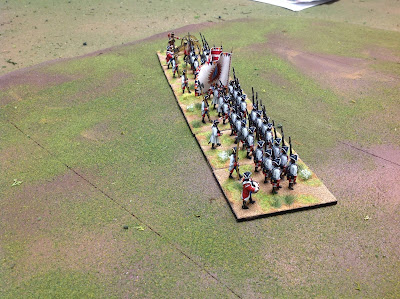 Of course, my cavalry regiments have to be increased in size from 24 figures to 36 figures in order for them to be able to contend with the larger battalions. In my Der Alte Fritz rules (free download on the Fife and Drum Miniatures webstore site) a full cavalry regiment stands a decent chance of charging into an infantry battalion and winning the melee, but at the cost of being nearly destroyed from the casualties. Generally, it is not a good idea for cavalry to charge a full strength infantry battalion.

For the Austrian cavalry, the solution might be to use my existing 24-figure cavalry regiments and then add 12 horse grenadiers or carbiniers to bring the regiment up to 36 figures. I use a 1:20 figure to man ratio in my wargame units (32 figure infantry and 36 figure cavalry}.

I now have 9 infantry battalions in my WAS Austrian army and I think that 8 battalions will be enough, given my table dimensions of 12ft by 6ft. I used to have a 15-17 foot table with two side tables, but I got rid of these when I redesigned my Man Cave last year.

The WAS Project will hopefully be completed by the end of this summer.
Posted by Der Alte Fritz at 9:04 AM

Labels: Austrian Infantry, War of the Austrian Succession, WAS