It is my plan to eventually add the Austrian Carabiniers to the Minden range too so that I can have a converged regiment of elites from the Dragoons and Cuirassiers. 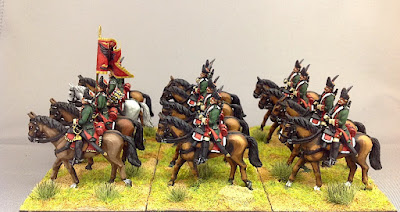 I chose to paint my first unit of Minden Austrian Horse Grenadiers in the uniform of the D31 de Ligne Dragoon regiment. I have always liked that regiment's uniform of green coat and red facings, thinking that it is perhaps one of the handsomest uniforms of the Seven Years War era.

Thank you for taking a look at these painted samples of the new Minden Austrian cavalry. Please feel free to leave any comments in the Comments section below.