The Best von Zieten Ever Made


One of the strengths of the Minden and Fife & Drum figure ranges are the individual "personality" figures that Richard Ansell has sculpted over the years. Each figure is different and they demonstrate Richard's master sculpting skills at their finest.

Afew years ago Richard Ansell sculpted a special figure as a commission for one of our Minden customers and that figure was of the Prussian cavalry general Hans Joachim von Zieten.

The customer provided us with the following piece of artwork for Richard to create his version of von Zieten: 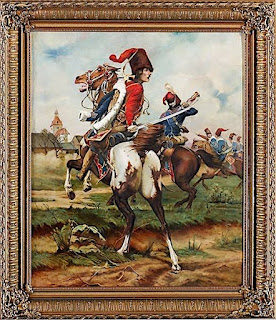 From there, Richard sculpted the following Zieten figure and a special one-off horse for the rider:

I think that Richard did a superb job of rendering a model that is faithful to the portrait that provided the inspiration for the commission. The animation of both the rider and horse are second to none. The detail on the horse furniture (reins, shabraque, etc.) are amazing to behold and the pictures pale in comparison to holding the actual figures in your hands.

I know that I am biased, but I truly believe that nobody is better at sculpting horses than Richard Ansell. I get inquiries from other companies about the Minden horses all the time as they aspire to have similar horse models in their product ranges.

The figure is one of the most fun, most enjoyable figures that I have ever painted:

I drill a hole in the underside of the rearing horse and placed a metal pin between the belly of the horse and the base in order to give the model more stability. This is an easy procedure to perform and is well worth the extra time spent. I then hid the pin with some tufts of long grass - I defy you to find the pin in the photo.

I am grateful that one of our customers provided the inspiration for such a nifty looking model of a Prussian personality figure. Von Zieten has become one of the most popular models in the Minden figure range, and rightly so.

I like all of Richard's sculpts, of course, but he really goes the extra mile and shines on his personality figures. Guess what? There are a lot more personality figures in the pipeline for both our AWI and SYW figure ranges. Stay tuned to this blog for more information.

Over the next couple of weeks I will be posting about the various personality figures that we have and put the spotlight on them.
Posted by Der Alte Fritz at 10:32 AM