From the Verandah of Sans Souci

This is just a short update of the things going on at Schloss Fritz these days, using a title heading of a column that I used to write in the Seven Years War Association Journal. I am writing this article whilst commuting to work on the train, so I will have to fix the various pictures so that they enlarge when I get home this evening.

I ran across this interesting site, courtesy of Ralphus at The Wars of Louis Quatorze blog. Ralphus has a very good eye or nose for finding interesting web sites that pertain to 18th Century military history topics. This is how I discovered the Obscure Battles site, which is a "must see" site for anyone with an interest in the Prussian battles of the WAS or the SYW.

In any event, Paper Battles follows the bloggers attempts to create tabletop games using paper troops and scenary, and if you click on the link and visit the blog then you will know what I mean. The gentleman has a wonderful model of the village of Leuthen that you can find by scrolling around through the site. Here is a picture of a Prussian battalion at 1:1 ratio. 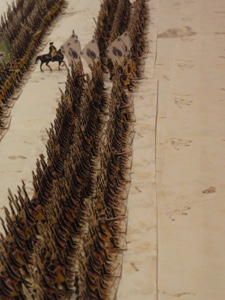 I was mortified to discover, courtesy of one of my readers, that I had glued the flags upside down on the first battalion. I have done the dirty deed on a single battalion in the past, but never on both battalions of a regiment. I can hardly set up a photo shoot of the new regiment being reviewed by Frederick whilst its colours are upside down. I could call them the Uberunter Regiment, I suppose, and keep the flags as they are, but nah, I just can't do that. So I'm going to have to clip off the old flags and replace them with new flags. Sigh.

Over the weekend I primed figures for the second battalion and got a good start at blocking in the basic blue coat, straw breeches and red facing colors, and a red-brown undercoat for the flesh areas. I find that I usually need to apply a second coat of each color to get good paint coverage, but the second layer is easier to paint than it is to apply the first layer; after all, you already have a guide to the areas that need the paint. One color that I have learned to dislike is RED. For some reason, applying the red facings of Prussian regiments has become a chore for me. The only item that I dislike even more is the painting of musket barrels ( I can never get a straight line of metallic gun blue on the barrel).

Come to think of it, I'm not too keen on painting Prussian or British drummers, with all of that lace. For some reason painting French drummer's lace is fun to paint. Go figure, I certainly can't.

No, I'm not talking about new Minden Prussian poses (although there will surely be more of those in the near future), but rather, I'm referring to new additions to my own Minden Prussian army.

I've realized that I've been painting ( or commissioned to be painted) quite a few Austrian Cuirassiers lately and that I run the risk of being out armored by the White Coats. We can't have that happen, so I have begun to cast my eye around for a new regiment or two of Prussian Cuirassiers. I currently have CR1, CR8 and CR13. The CR2 Prinz von Preussen regiment seems like an obvious choice. Who can resist yellow coats (kollets)? They have a unique look to them relative to anything else in the SYW era.