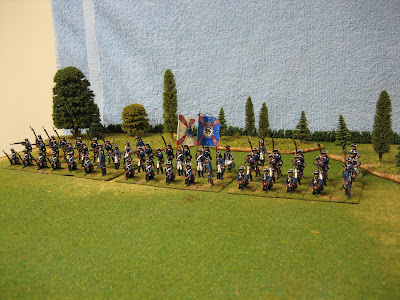 
The regiment designated Infantry Regiment 18 ("IR18") was actually known as the Prinz von Preussen regiment, after its inhaber August Wilhelm, who was one of Frederick's brothers. After he died in 1758, the King's nephew, Friedrich Wilhelm became the next inhaber of the regiment. This appears to follow a House of Hohenzollern tradition that the royal sons were all given their own regiment to command. Prince Henry was the inhaber of IR35 and Prince Ferdinand was that of IR34. So these three regiments probably had a little more prestige than some of the other run of the mill regiments in the Prussian establishment.

IR18 always seemed to be a part of "the King's Army", i.e. the core contingent that always accompanied King Frederick in his various battles during the Seven Years War. This undoubtedly speaks to the quality of the regiment, and indeed, Frederick rated it as one of his "good" regiments. It was one of the core Brandenburg regiments, stationed at Spandau and Nauen during peace time. Its recruiting area was the Altmark.


According to Christopher Duffy, Frederick commented on this regiment and that of Forcade after the battle of Zorndorf: "I owe my salvation to these regiments and General Seydlitz. I could do anything with commanders and troops such as these." 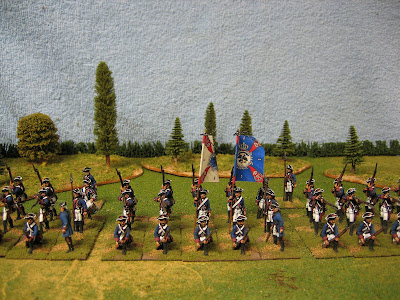 A closer view of the command stand. Flags are from GMB Designs.


IR18 sports the traditional Prussian blue coat and white waistcoat and breeches. Its facing colors are an unusual rose (cuffs, lapels, collars) in common with that of IR7 Alt Bevern. The turnbacks are also rose, which is unusual as Prussian linings, hence their turnbacks, were usually red.

The grenadier companies were paired with those of the IR15 Garde and thus have the designation of "15/18" on various battle maps in the Prussian General Staff Histories and in the Duffy books. The combined grenadier battalions inhabers were Bulow (1756), Kliest (1757), Graf von Anhalt (1759). It had a rough time at Soor and was captured at Hochkirch in 1758.

IR18 was one of the very first Prussian regiments that I had in my wargaming army, going all the way back to 1988 when Bill Biles painted 20 RSM figures for me, along with 20 more depicting IR8. I did not know how to paint back in those early days of wargaming (for me) so I farmed out the painting of the Prussians to Bill and painted the Austrians myself. Eventually, I learned how to paint and developed my own style, an example of which you can see in these pictures. With the completion of this unit, I now have another IR18 in my larger 1:10 ratio army for the Batailles de l''Ancien Regime ("BAR") rules.
Posted by Der Alte Fritz at 11:21 PM