Keeping A Journal of Ideas

Here is a quick little idea for your consideration, carry a small notebook with you when you travel or are on the go. I purchased a small Moleskine journal earlier this year so that I could keep all of the ideas, that I previously jotted down on scraps of paper or in the margins of my daily newspaper, in one place. I have a daily work commute, via train, of one hour each workday, so this gives me a lot of time to do some reading, check on various forums for hobby news, or write in my journal or on my blog.

I have posted a couple pictures of pages from my notebook to give you a better idea of what I am talking about. The first picture, below, depicts several pages of notes for an after action game report following our recent Battle of Kolin game. You can be as elaborate or as bare bones as you care to be in your entries. I take a little bit of inspiration from Neil Cogswell and the illustrations that he included with his Horace St. Paul books. So I try to populate the pages with hand drawn maps containing two dimensional drawings of the terrain or troops whenever I can. This seems to give the entry a little bit of "life" to it. 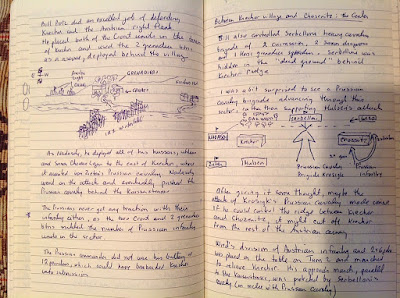 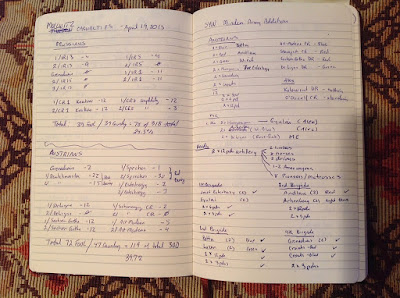 [It seems that Blogger application will not let me change the justification of the paragraph and the space between the two pictures above is center justified, rather than left or right. So I'm skipping to the bottom of the page where I already had a left justification set up]

The bottom picture illustrates some record keeping from my Mollwitz game. I recorded the casualties for each unit so that I can see which units carried the brunt of the fighting. Eventually, I will record the results in a Unit Diary that I'm keeping for each battalion in my Minden 1:20 ratio Austrian and Prussian armies. I am also starting a Battle Journal to record the results of each battle. This idea is inspired by Charlie Grant's article in the current Wargamers' Annual Summer 2015 Special booklet. Each battle will be assigned its own number (1, 2, 3, etc.) and when a unit participates in one of the battles, the battle number will be cross posted to the Unit Diary so that I can refer to either journal as needed.

The right hand page, above, contains some simple jotting down of ideas and which regiments to add to my Austrian army ahead of my Battle of Kolin game at the 2016 Seven Years War Association Convention in March 2016. I know how many regiments are needed for the game, and I know that I am a few regiments short, so some of the painting will be farmed out to my nephew Alex. I have also scribbled down ideas on how I want to brigade my Austrian regiments.

At other times, I might be contemplating which figures to add to the Minden and Fife & Drum figure ranges, so I will write down ideas in groups of 16 figures (16 is the maximum number of figures that will fit into one master mould, so when Richard Ansell sculpts figures, he works in batches of 16 figures). There are an infinite number of combinations of figure ideas for those 16 mould slots, so you can imagine how many times I jot down a "what if" group of 16 figures almost every other day.

At other times, I might be reading about some battle and an idea for converting it into a game scenario will pop up in my head, so I write the idea down in my journal.