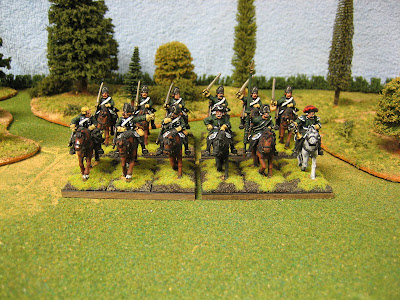 
"Triple blue and three times damned to the Devil (Dreimal blau und dreimal des Teufels)," is allegedly what Frederick the Great said about his various frei-battalion troops. The phrase refers to their typical blue coat with light blue facings and light blue waistcoat.

One frei korps unit that performed better than Frederick's low estimation of the troops in general, was the legion of infantry, cavalry and artillery recruited and organized by Colonel Friedrich Wilhelm von Kleist in 1759. These were the best of the best in Christopher Duffy's estimation and the eventually grew into a corps of 6,000 men of all troop types.

The unit began its service with Prussian with the formation of a squadron of hussars in 1759 and was gradually augmented with a regiment of Croat styled infantry, a regiment of dragoons wearing a sort of horse grenadier hat, some more hussars, and ten squadrons of uhlans. Finally, a battery of horse artillery decked out in green uniforms and some jagers filled out the corps. 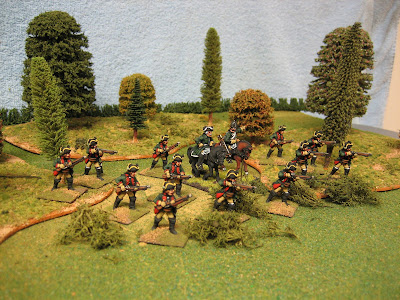 Von Kleist jaegers prowl the woods, directed by Colonel von Kleist and his aide on horseback.

I had thought that my days of painting Prussians had come to an end, seeing as how I had everything that I could possibly need and being limited by the number of boxes of figures that I could transport in my car. But then, our little group came up with the idea of painting figures so that we could do a game featuring light troops, or Kleine Krieg. I happened to have a batch of the von Kleist dragoons in storage. I had acquired these Foundry figures from the old Standing Order days, when I would automatically receive a box of sample SYW figures on a regular basis.

I tried painting a couple of test figures first, and found that I rather enjoyed working with these particular Foundry figures. They have a lot of personality and character to them, and they aren't the misshapen dwarves that seem to pass as Foundry figures these days. And being largely green in color, they are not that hard to paint. The other night, I finished two figures in about two hours of nonstop painting.

I plan to build a corps comprising of a regiment of dragoons (36 to 48 figures), some dismounted dragoons (maybe 24 at most), a battalion of the Green Croat infantry (60 figures), some of the jaegers (30 figures), a squadron of hussars (12 figures), and maybe two squadrons of the uhlans (24 figures). Finally, I will add two 6 pound horse artillery guns with five crew each.

I have a good start on this project, having painted a dozen each of the dragoons and jaegers with another 24 Croats on the painting table. I bet though, that when the resupply of Foundry figures arrives in a few more days, that I will want to switch back to painting the von Kleist dragoons (that look like horse grenadiers). Anticipation makes it all worth while.
Posted by Der Alte Fritz at 10:38 PM