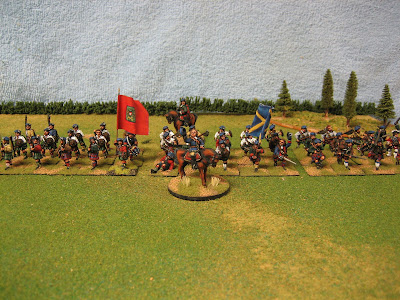 Well, I've been painting Front Rank Jacobites for the past couple of weeks now and I finally have a reputable number of figures painted and based for show and tell. The picture above depicts 60 figures divided into two clans. The Appin Stewarts with the blue flag and gold saltire are on the right. The Camerons, with the red flag, are on the left. 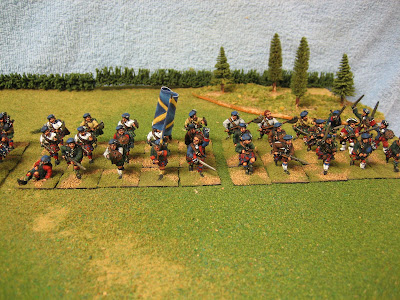 As you might imagine, painting Jacobites is a challenge and is not the easiest subject for one to paint. For starters, there are no uniform tartans worn within each clan regiment, so each figure has to be painted as an individual. This translates into very slow painting. After completing the first dozen or so figures, I hit on a formula that sort of speeds up the process. I would select a group of five or six different poses, but paint them in the same combination of colors. For example, they might all have red kilts and plaids, and white shirts, but since there were multiple poses, they would all look like individuals once painted.

I also settled upon a couple of color schemes that I liked or were easy to paint. Red was a common color for the plaid. So most of the reds are painted with black boxes and then I mix up the color where ever the window panes cross. One might have a dot of blue at the intersection of the panes, others grey, or green, etc. I also have a standard green plaid that I like: green undercoat, medium green window panes, and light green dots where the panes intersect. It looks a bit like the modern Gordon plaid. 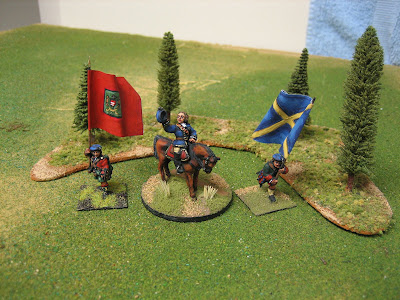 The clan standards are reviewed by Prince Charles. All figures are from the Front Rank range.

So far, I have been hand painting my own flags. I have a couple Signifer brand 25mm flags, but they look rather sterile in comparison to hand painted jobs. The commercial grade flags are better, but my crude, rough hand painted jobs somehow look better to me. Unfortunately, GMB Designs does not make flags for the Forty Five, otherwise I would use those. I still have to investigate flags from The Flag Dude. These are printed on cloth and look very nice. 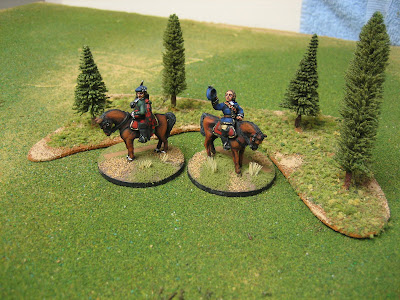 I used a "lowland cavalry officer" for my version of Lord George Murray, the commander of the Jacobite army. Front Rank makes a nice Prince Charles, seen above, but all of the other Jacobite personalities are on foot. That simply won't do. So the lowland cavalry officer looked like it would make for a nice stand-in. I may use some French mounted officers and do a head swap, putting them in bonnets. More on that idea later.

We play our first game of the campaign next Saturday, May 3rd. I think that I've done a pretty good job getting the first 60 figures done on time. Imagine how grand another 60 figures will look! 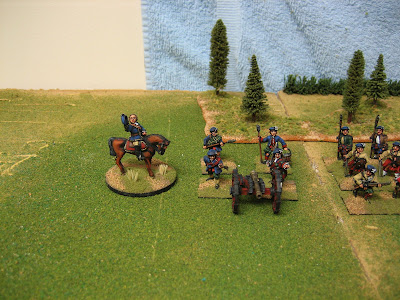 Jacobite artillery & crew supervised by Prince Charles. Gun model is the Elite Miniatures Swedish 4 pounder. Everything else is from Front Rank.
Posted by Der Alte Fritz at 9:02 PM