These Are A Few of My Favorite Things 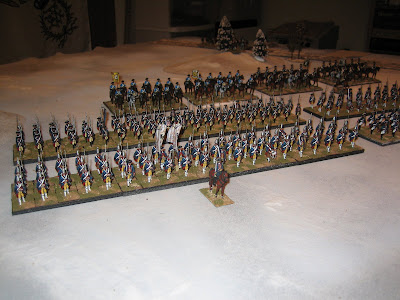 I've been a wargamer for over 20 years now and I'm happy to report that a good picture still has the ability to take my breath away. Just click on the picture above to expand it to full size and you will see what I mean. I set this picture up last Winter using some of the terrain that I planned to use for my Leuthen Churchyard game at the 2007 Seven Years War Association Convention in South Bend, Indiana. This one conveys a sense of the spectacular look of the big battalions that we are using in our Batailles de l'Ancien Regime (or "BAR") games. There you have it: 60 figure battalion in 20 files and 3 ranks, topped off by those wonderful GMB Designs flags.

The front line features one of my favorite regiments, IR15/III, or the Third Battalion of the Guards in Frederick the Great's army. Behind that is the musketeer battalion IR7 Bevern. Bringing up the rear are two squadrons of dragoons and two squardrons of cuirassiers. Leading the advance, in a scene reminiscent of a Carl Rochling print, is the Duke of Bevern himself. All of the infantry figures shown are from the Stadden 30mm range, designed by the late Charles Stadden, back in the 1970s. The cavalry figures are from the Suren Willie range of 30mm figures and these also were originally sculpted back in the 1970s.

Were this a real wargame, I doubt that the Guards would be leading the advance. Cannonballs and bullets cannot tell the difference between a Guard and a Grunt, but those wily Austrians and French sure can tell the difference. Perhaps foreshadowing the tactics of Napoleon, Der Alte Fritz likes to send the musketeers and fusiliers in first and then he sends in the Guards to clean up and walk away with all of the laurels. That's not entirely true, for often the Guards are the reserve and seem to end up shoring up some crumbling flank or holding some key terrain feature that could decide the battle.

Do you ever set up your figures on your wargame table and then just look at them for an hour or more? I must admit that this happens to me frequently. I will find myself admiring my little beauties and before I know it, it's after midnight and I just know that "there's the Devil to pay" in the morning when I have to get up and go to work. I will work my way around the wargame table, looking at the serried ranks of soldiers first from one angle, and then another. Then I will go back for another look, maybe picking up a stand or two to get a closer look. Finally, I look at my watch and realize that I must go to bed. But then, just as I'm about to turn out the lights in the basement, I just have to go back for one more look at the Guards or that new unit of hussars that were recently finished. Alas, I fear that it is hopeless some times.
Posted by Der Alte Fritz at 8:19 AM