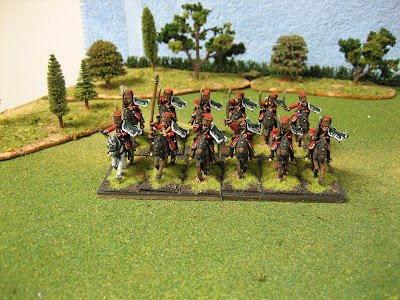 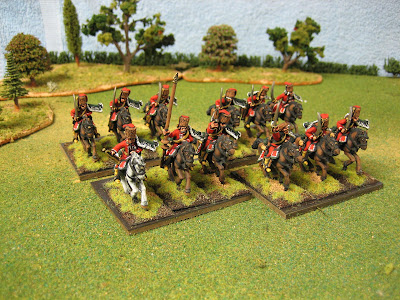 Another view of the hussars. They had a plume in their fur busbies, but in my army, they have packed them away for the vigorous campaigning that they are engaged in.


This past summer at Historicon 2008, the triumvirate of Graf Frey von Freyberg, Monsieur le general de Chevert, and Der Alte Fritz decided that it would be fun to have a game that featured nothing but light infantry and cavalry of a decidedly shabby nature, i.e. freikorps and similar such troops. We set a goal of having our new troops ready and painted by early December. With that in mind, I procrastinated and kept painting Gensdarmes cuirassiers for the Big OSW Game in October. However, once that event had come and gone, I was free to paint lousy freikorps troops.

I decided to build a portion of the all-arms von Kleist freikorps because, well, it had some of everything: light infantry (Grun Kroaten), artillery (some 6 pounders and 3 pounders), light dragoons (horse grenadiers), uhlans (10 squadrons in fact) and hussars. Not only were they a diverse lot, they were also very colorful. They were designated as Freikorps No. 12 in the Prussian military establishment, although I believe that the numbering system was applied well after the Seven Years War had concluded.

By the time December rolled around, I had completed three squadrons (36 figures) of the horse grenadiers, one squadron of the hussars (12 figures), a battalion of Kroats (60 infantry), a company of jagers (12 figures) and two sections of 6-pounders. Time prevented me from painted dismounted cavalry and horse holders for each cavalryman, but that is a goal for the future. Messers Frey and Chevert have elected to paint the Fischer freikorps in French service and they have all of their mounts and dismounted figures completed. I have a bit of catching up to do, to say the least.

Historical Overview
According to George Nafziger:

"The freikorps consisted of the Volontair-Regiment Husaren formed in 1759, the Freidragoner Regiment formed in 1760, the Croaten , formed in 1761, and the jager formed in 1761. It was the largest and most effective of the freitruppen. The hussars executed raids into Franconia and fought at Kunersdorf. Both the hussars and dragoons were at Torgau, while the hussars, Croats and Jager were at Freiberg." (The Prussian Army of Frederick the Great, Vol 2)

************
One of the unique distinctions of the von Kleist Freikorps is that they are the only unit of that type that carried colours or flags. None of the other frei regiments had flags. You can find very nice examples in the Hans Bleckwenn booklet.

Christopher Duffy is of the opinion that the von Kleist was incomparably the best of the frei troops in Prussian service. They were organized by Colonel Friedrich Wilhelm von Kleist (Green Kleist) in 1759 with the formation of a single squadron of hussars and eventually grew into a combined arms force of 6,000 men by the end of the SYW. It fought as a whole formation at Freiberg in 1762, but more often was employed on raids into Bohemia against the Austrians or into Franconia against the Reichs-armee.

Von Kleist was noted for his discipline, as Duffy indicates:

"After a successful action it was his habit to gather the officers of the corps together, and point out the various mistakes which had been made by the two parties, with the associated causes and results, and the lessons as to how the blunders could be avoided in the future. " ( Army of Frederick the Great, page 137).

End Note
I used the Foundry figures to create my version of the von Kleist freikorps, because Foundry has all of the necessary elements, including the rarely-made uhlans and uhlan bandsmen in their Turkish style uniforms. Hinchcliffe also makes very nice Grun Kroaten infantry and the horse grenadiers (dragoons) and I strongly considered using these figures as well. RSM makes the horse grenadier figure.


Eventually I hope to have time to paint a couple more squadrons of von Kleist hussars, for these are rather spectacular looking uniforms, with the red dolman and breeches, and green pelise, and green and red shabraque with van dyking. I also intend to add maybe three squadrons (36 figures) of the uhlans and dismounted dragoons and hussars. In our Batailles de l'Ancien Regime (or "BAR") rules, I rate all of these sub units as Trained. I think that it was quite gentlemanly of me to paint low quality troops when my brushes could have been spinning out more cuirassiers or something spectacular such as ten squadrons of Bayreuth Dragoons.
Posted by Der Alte Fritz at 6:28 PM