The Return of the Black Legion 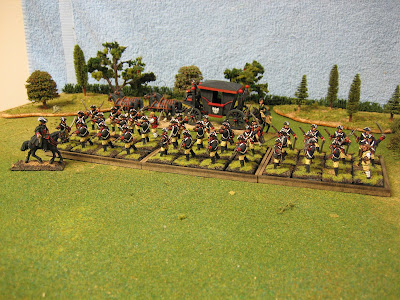 Black Scorpion "Marines" from the Pirate Range painted as the personal bodyguard of Milday de Winter. Colonel Bauer (left foreground) is from the Foundry Highwaymen pack, the black coach is from Redoubt's ECW range, and Herself is a Suren figure.

(click the pictures, if you dare, to enlarge the view)

I first introduced the dreaded Black Legion of Milady de Winter in my post dated October 23, 2008 and I invite everyone to check the archives for the background to this unit. I was at scrolling through the net when I happened upon these figures from Black Scorpion, which are supposed to be British Marines in red coats and thought that they would be perfect to play the role of Milady de Winter's personal guard. Their uniforms are loosely based on those of the Favrat Freikorps in Prussian service (black coats, straw small clothes, red facings).

Herself takes no chances when she is bounding around Europe, which can be a very dangerous place for a lady in the mid 18th Century, so where ever she goes, she is escorted by three companies of her black clad bodyguards. 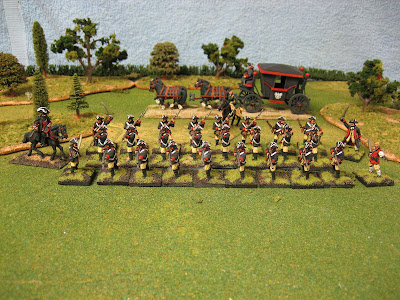 The Black Legion recruits are soldiers of fortune and other naer-do-wells who would gladly sell their services to the highest bidder. Most of them have prior military experience in the various armies of mid-18th Century Europe, so they know what they are doing and they are very loyal to their employer. Nobody really knows of the existence of Milady de Winter, so she employs the evil Colonel Bauer as the commander of her guard. Bauer is, in effect, the front person that the rest of the world sees. When the Black Legion strikes, perhaps to raid a village, kidnap an unfortunate victim, blow up ships in certain harbors, then it is the foreboding Colonel Bauer that the public sees.

Occaisionally, it suits Milady's purposes to conduct affairs of intrigue and espionage without attribution. For this purpose, she employs a hired band of irregular cut throats, also decked out in black, known as The Regulators. 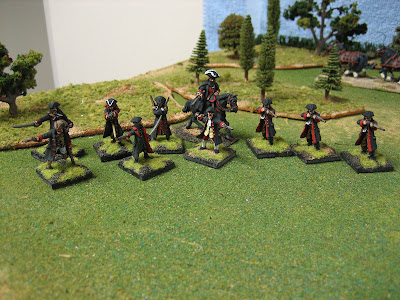 Do you need to have someone "disappear" permanently, some information to be "coerced" from an unwilling informant, or other dark deeds of that ilk? Then the Regulators are at your service. I have heard that there is no deed too dastardly for them to do. 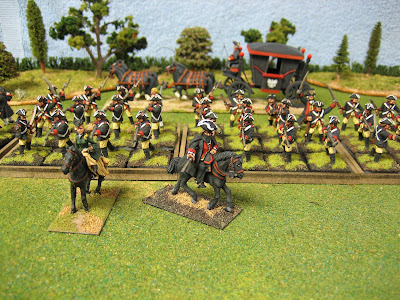 Some would say that Milady de Winter is in the employ of the King of Prussia. That may or may not be true. It is my understanding that Milady has her own agenda to follow, and it just happens to coincide with that of King Friedrich, for the time being. However, evil can not be neatly classified and contained and I have no doubt that we shall see this dark woman again and again.
Posted by Der Alte Fritz at 12:12 AM