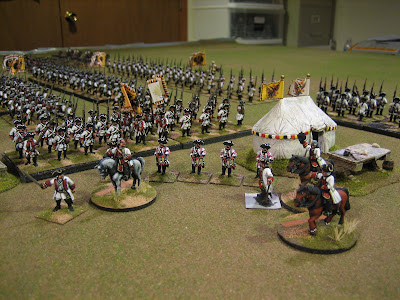 Marshal Leopold von Daun's headquarters. The Marshal is a Front Rank figure, the two mounted and dismounted officers are Crusader figures, as are the de Ligne drummers (pink) and the battalion in the rear. Tents by HG Walls. The Marshal and his staff are deciding how many more figures they need to order from Crusader and Front Rank to increase the army.

I set up my SYW Austrian army on the wargame table last evening so that I could see it "en masse". This gives one a better idea of what one has when all of the figures are displayed at once. It also allows me to figure out what I need in order to make this a viable army. By "viable", I mean strong enough to fight my massive Prussian army without French allies. In other words, I want to eventually have all-Prussian versus all-Austrian wargames.

The roster so far includes 7 musketeer battalions, 1 grenadier battalion and 3 small (24 figures each) bands of RSM Croats which I consider to be one 72-figure unit of light infantry. The cavalry is understrength at 4 squadrons of cuirassiers, 3 squadrons of horse grenadiers and 4 squadrons of dragoons. This is why I am painting cuirassiers right now. After the 5th squadron of cuirassiers is done, then I will add some more dragoons. Looking at this lot made me realize that I want to increase the horse grenadiers to 48 figures (4 different squadrons in 4 different uniform colors). 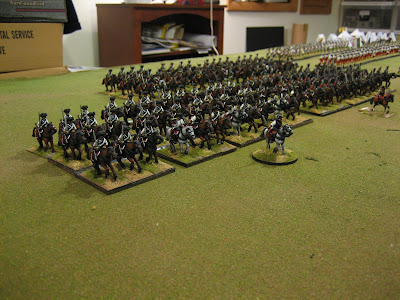 A not so great picture of my Austrian cavalry - all Crusader figures. 10 squadrons shown in the picture. I will try to take some pictures of the cavalry in better light.

The artillery park looks OK in relation to the 9 battalions that I have. The park consists of one 12-pounder and four 6-pounders plus the limbers and crew. I use 6 crew for a heavy gun, 5 crew for a medium gun, and 4 crew for battalion guns. All field artillery have limbers, except for the battalion guns, which are man-handled. 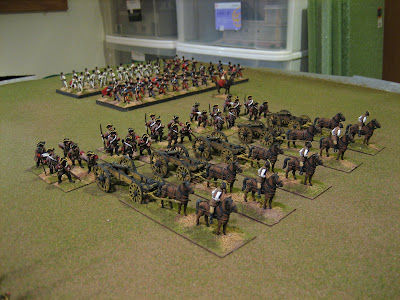 Austrian artillery park. The three guns on the left are Elite Miniatures Napoleonic 12-pd and two 6-pd guns. The other two guns are Front Rank medium guns posing as 6-pounders. The limber teams are from RSM. The gun crews are an assortment of Crusader and Front Rank figures.

I did a little inventory this evening and much to my great surprise, I found another unpainted battalion of Front Rank figures that I can add to my army. There were 54 figures in a firing line of three ranks (kneeling at the ready, standing firing, and assorted officers, drummers and file closers forming the third rank). Other unpainted battalions include two 60 figure Minden Miniatures units that I'm dying to paint, and those perfidious Nick Esterhazy fellows.

Later in the week, I will post some pictures of my von Kliest Hussars and Milady de Winter's Black Legion of bodyguards and a company of irregular cut throats in her employ. Wait until you see what figure I used for Colonel Bauer.
Posted by Der Alte Fritz at 12:20 AM