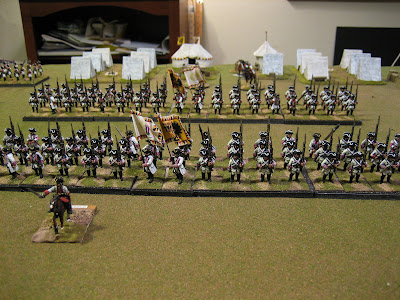 Austrian Musketeer Regiment de Ligne using Crusader figures and GMB Designs flags. The mounted officer is an Old Glory figure drafted from my "conventional" Austrian army (4 to 6 figures per base and 24 figures per battalion). Click the picture to enlarge the view.


Some one asked me how I painted my Austrians and got the effect that you see in the de Ligne Regiment above. So I thought that I would provide a quick "how to" for painting Austrians.

I start by priming with black primer and then covering that with a coating of acrylic black paint. I find that the primer has a fine, but slightly rough surface, whereas the coating of black acrylic provides a good painting foundation. It also acts as the main color for such equipment pieces as the tricorn hat, gaitors and also creates a black lining effect when I am done. It also provides the foundation for muskets and equipment bags, which will later get covered with brown paint.

After the black acrylic is applied, I layer on a coating of light gray paint, using IWM (Iron Wind Metals) Gray #77-707. This almost appears to be white in color, but once you add in the main white color, the gray will be noticeable and act as your shading color. IWM is the successor company to the old Ral Partha company, based in Cincinnati, Ohio.

I then cover the skin areas with a red brown color that acts as my base color. Then a ruddy flesh covers the red brown completely as my base flesh color. Highlights are added on the tip of the nose, the chin and maybe the cheek bones on the face. For hands, I allow the red brown to show through between the fingers for contrast when I apply the ruddy flesh color. Then I add regular flesh color as the highlight to the back of the hand and/or some of the fingers. I don't paint the individual knuckles, a la the Kevin Dallimore method.

Now I break out the IWM White #77-706 and paint over the coat, taking care to leave some gray unpainted under the arm pits, the crease of the elbow, and any other natural fold in the cloth that the sculptor has provided for the figure. I also use the same white color to paint a stripe of white down all of the cross belts and haversack belting etc. Remember, these parts were already painted black, so a single "skunk stripe" down the middle of the belting is all that one needs. It then looks like you black lined all of your belting. Easy peasy, as they say.

Then comes the eyes. I paint the eye socket black, and then carefully jab two white dots on each side of the eye socket, leaving the center portion black. It looks like I had painted the eyeball white and then dotted the iris with black, but as you can see, I actually did the reverse. Again, this is an economical way of painting eyes. It is the same principal as painting a button: for buttons, one paints the button black and then dots the button with the metalic brass or silver color. Eyes are done the same way.

Lastly, I now do all of the metalic bits such as pewter color for the musket barrel or some buttons; brass for the butt plate of the musket and any buckles that the figure is wearing, or maybe some silver lace accents for officers or officers' sashes.

In recent years, I have started "highlighting" the black areas such as the tricorn and the gaitors and the cartridge box. My highlight is my own mix of black paint with a little bit of flesh mixed in . Add a little bit of flesh at a time until you get the right color. Too much flesh or white added in will give you a dark grey, and you don't want that for highlighting black. The color should still appear to be black.

That's it in a nutshell. You can see from my description that I try to use the same color for multiple parts of the figure. It is an economy of motion that saves time and results in faster painting of the figure.

Well, tonight (wednesday evening) I did not do any painting, but instead, I cleaned up two squadrons of Austrian hussars (cleaning, washing in rubbing alcohol, then gluing to metal bases in preparation for black priming). It took me two hours to get 24 figures ready. I hate doing this kind of prep work, but with a bunch of vacation days coming up over the next couple of weeks, I want to have an inventory of primed figures ready for the paint brush.

By the way, I have been very surprised by the outpouring of interest in the Austrians. Two days ago, I had nearly 500 hits on the blog that featured the Austrian HQ camp. That ranks up there with Teddy Bear Wars and Jacobites. His Royal Nibs, King Frederick, is very jealous of all the attention that the Austrians are getting.

"If the Austrians want some attention, I will be just the person to give them what they want," said the King.
Posted by Der Alte Fritz at 12:05 AM