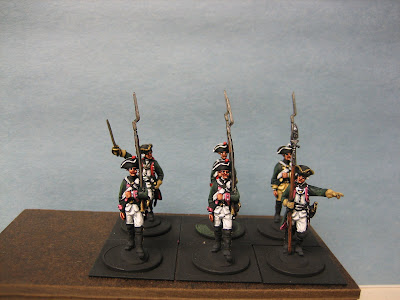 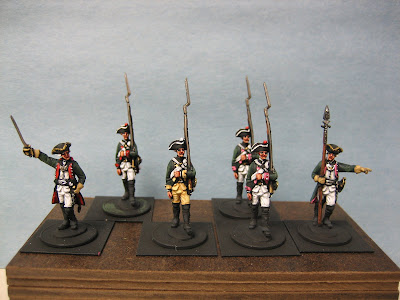 The Minden figures are a joy to paint and I was able to finish six figures within a couple of hours this evening. You can see that I glued the figure onto a penny coin and in turn, glued the coin onto the galvanized metal base that is one inch square, for BAR rules movement trays. When I prime the figures, the metal bases are already attached to the figure. I do this because it gives the base a coating of primer that hides the bare metal of the base. This saves me much time later when I terrain the base. I don't have to paint the metal base before adding the spackle mix. There's nothing worse than a fine base with bits of bright metal showing through. 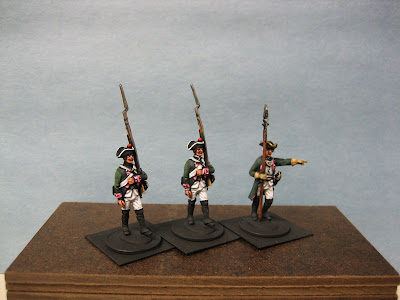 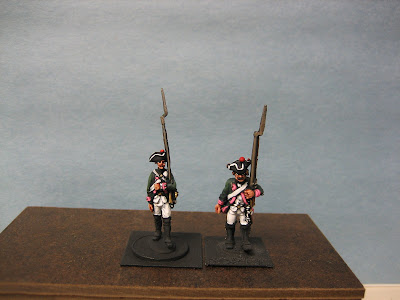 Comparison of Minden (left) and Foundry (right) Prussians both painted as the Charlottenburg Musketeer Regiment. Need I say more about which figure looks better?

The above photo compares the Minden and Foundry samples that I painted in the same regimental uniform of the Charlottenburg Musketeers. The more that I look at this picture, the more convinced I am that I made the correct choice of figures to use in my new Hesse Seewald army. The Mindens look so much better because they actually look like real people, only in 1/56 scale.

I have placed an order for two 50-figure regiments, plus mounted officers and some Austrian and Prussian artillery crews, for later use. After seeing these samples painted, I look forward to tackling the entire regiment and finishing it off. In the meantime, I have a 60 figure Minden Austrian fusilier battalion to work on, so that will keep me very happy.
Posted by Der Alte Fritz at 11:58 PM