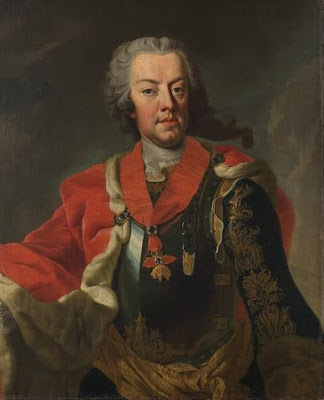 Charles of Lorraine, noted for his string of losses included Chotusitz, Hohenfriedberg, Rocoux, Prague and Leuthen. He was retired after Leuthen and replaced by Leopold Daun as the principal commander of Maria Theresa's Austrian armies. A handsome, if unlucky, fellow.


There is much work going on in the Habsburg hinterlands as Marshal Leopold von Daun prepares his army for the upcoming campaign of 1759. The recruits are coming in by droves from Crusader, Front Rank, Foundry and Minden Miniatures. Now it just becomes a matter of whether or not the royal tailors can complete so many uniforms before the winter snows melt and spring abounds in Bohemia and Silesia.

I hope to have the 5th squadron of cuirassier regiment Birkenfeld completed by this evening. I just have to finish the horses and then they are done. I have also started work on two squadrons of the Paul Anton Esterhazy ("Damn Their Eyes") Hussars and the first couple of painted samples show some promise. That should get me through the end of the month, at which time I will have 14 squadrons of Austrian cavalry. That sounds like a lot, but it pales in comparison with the 32 squadrons of Prussian cavalry that I already have. As you can see, there is much work to be done.

I may have mentioned before that I can painted approximately a squadron of 12 figures per week or a half battalion of 30 figures in a week, on average. So if I was really cranking out the production, that would work out to two battalions (120 figures) or one regiment (48 figures) per month. One gets tired of painting nothing but horses, so I will probably switch back and forth between infantry and cavalry. I'm kind of on a cavalry binge right now, so after the hussars are completed, I think that I will add another infantry battalion for a change of pace. That would bring the infantry up to 10 battalions (versus 18 btns of Prussians).

Thankfully, Marshal von Daun has Saxon allies (2 regiments of 48 dragoons) and a small force of Austrians led by Graf Frey of Freyberg (3 battalions and 2 sqds of cuirassiers and 2 sqds of hussars). Otherwise he would need to hunker down in one of those Vauban fortresses that I mentioned the other day.

Daun would like to increase his army to a size sufficient to warrant an invasion of Silesia in 1759, or perhaps recapture Dresden from the Prussians.
Posted by Der Alte Fritz at 1:56 PM