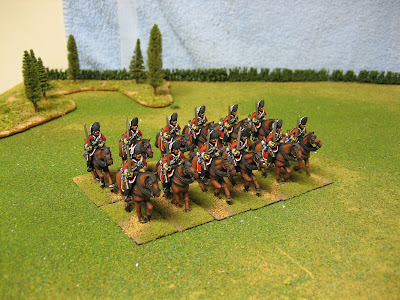 
His Royal Nibs will not be pleased to hear that I have decided to mobilize the SYW Austrian army. The recent painting binge of Prussian light troops has no brought my infantry establishment up to 19 battalions of 60 figures and 32 squadrons of 12 figures. I lost count of the artillery, but there must be at least a dozen guns and crew.

The Austrians, on the otherhand, have a mere 9 battalions of infantry, 10 squadrons of cavalry and 5 cannon and crew. Clearly then, it is time to augment the Austrian forces. I should mention that my Austrians can count on its allies from the Duchy of Freyberg (3 btns and 4 squadrons of Austrians) and the Saxon cavalry (8 squadrons) in the employ of Monsieur Chevert (Mr. Protz) to fill out the battle line. So all is not as hopeless on the battle line as it would seem at first glance.

There are two other drivers of the urge to paint hoards of men in white coats. Those being (1) a reading of the Charles Grant scenario for the Battle of Lobositz, as described in Charles S. Grant's new book, The Wargame Companion, and (2) a nightly reading of extracts from Christopher Duffy's new book on the Austrian army, titled By Force of Arms. Both provide considerable inspiration to create smaller battles on the tabletop. However, I simply need more Austrians in order to fight balanced wargames.

The Grant scenario for Lobositz requires 10 battalions and 4 regiments of heavy cavalry for both sides. All this on a 9 foot by 7 foot table. Since my home table is 6 feet by 12 feet, I ought to be able to accomodate Grant's Lobositz game on it.

There are two squadrons of Crusader Austrian cuirassiers primed and ready to go on my painting table. With a considerable number of vacation days remaining in the month, I ought to be able to polish these off by the end of this year (that sounds like a long time when one puts it like that - we are talking a mere three weeks here). This augmentation will increase the Birkenfeld Cuirassiers up to their full strength of 5 squadrons of 12 figures, or 60 figures total.

After that, I have another dozen de Ligne Dragoons to paint - which will bring the regiment up to 60 figures as well. Thus, two full cavalry regiments ought to be able to hold their own against similar numbers of Prussian cavalry. After that, I am tempted to tackle my 36 figure regiment of Esterhazy Hussars (light blue pelise and dolman with red breeches, yellow cuffs and yellow boots). The Esterhazys are destined to become the sworn enemies of Friedrich and Hesse Seewald. The King holds a long grudge against the Esterhazy family for their closing of the SYW uniform/trophy collection that they have in Forschstenstein Castle (in Austria). Der Alte Fritz was visiting their schloss in 2005 and he was not able to see this fabulous uniform and flag collection (many of the Prussian SYW artifacts were captured at Maxen). My only recourse is to paint the Esterhazy infantry regiment and the Esterhazy Hussars, and then defeat them on the table top. Yes, revenge is a dish best served cold.

Be that as it may (and it is all in fun my friends), it is time to forge ahead with the Austrians. I am shooting for a deadline of early February 2009 so that I can have them ready for a game that I will run at the Little Wars Convention in that month. February is sooner than we all think.
Posted by Der Alte Fritz at 6:51 PM