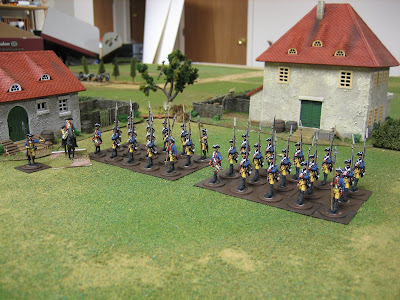 Since we have been on a Minden roll of late, here is a picture of IR34 Prinz Ferdinand that I painted back in March 2008.


Well 2008 is drawing to a close here in Hesse Seewald and it has been a very good year for wargaming, conventions, fellowship, painting and building up my SYW Prussian army. I will provide a more detailed "year in review" over the next couple of days, but I wanted to get this short post, which is a milestone of sorts, on the blog. This is the 100th entry of the year, so I'm going to pat myself on the back for a job well done and toast the New Year with a Diet Lime Coke and wish everyone a Happy New Year.

I have to say that I have been sort of surprised by the overwhelming interest in the Minden Miniatures and Hesse Seewald imagination uniforms that I have posted over the past couple of days. We have had over 400 site visits, just this day, and the number of comments on this topic is one of the highest ever (ranking up there with Teddy Bear Wars and the Jacobite Rebellion).

I painted an extra fusilier figure this afternoon in green coat, straw small clothes and red facings, brass mitre plate with straw bag and red border. This is experimental for a future unit. More on that tomorrow.

Update Posting - Full Year Report on Painting Production
I spent some time this evening toting up the statistics for the number of Olley Painting Points in 2008 and I came up with a grand total of 1,070 points. This translates into 798 total figures and equipment pieces that I painted during the year. Actually, I now recall that I painted the two Sharpe and Harper figures as well, which puts the total figure production up to 800 figures. The break down in terms of figures for 2008 was 510 foot, 272 mounted, and 18 artillery and equipment pieces.

In comparison, the 2007 numbers were notably higher with 1,015 total figures painted and 1,137 Olley Painting Points recorded. That amounts to 215 fewer figures painted in 2008 versus 2007. Nevertheless, this year's production was still substantial and probably was higher than I would have liked, in terms of family considerations and life balance.

The production was spread over the year fairly evenly, what with 528 points painted during the first half of the year (January through June) and 508 points during the second half of the year (July through December). That averages out to about 89 painting points per month, or slightly higher than my stated goal of 60 to 72 points per month. You may recall that an infantry figure or a cannon/limber/wagon count for one point and a mounted cavalryman or general counts for two points.

Battles Fought In 2008
Our little group of SYW enthusiasts in the Midwest were very active during 2008. By my count, we had 9 "club games" and 7 "convention games" for a total of 16 miniatures game for the entire year. After deducting the games played at the SYW Association convention (2), Little Wars (1), and Historicon (3) for which I can't recall the outcomes, and hence they don't count in the standings, that leaves us with 10 games. Two of these were Jacobite Rebellion games that do not directly affect our campaign. Of the remaining 8 games then, the French won 5 and the Prussians won 3 games. So my congratulations to the French/Gallians for a fine military performance in 2008.

But let us analyze the results further: three of the French victories were smaller skirmish games. So there seems to be a definite French edge in the Kleine Krieg wargames. In larger games, the French won the battles of Taberberg on October 24th at Rockcon and Steinkreisdorf on November 15th (Der Alte Fritz was absent that day).

The Prussians fared much better in the really large wargames in 2008. Prussian victories were recorded at Ritterbrucke on March 8th, Oberon on June 7th, and at the Big Battalion Old School Game (Freiberg) on October 11th. All three Prussian victories were lopsided wins as their cavalry was finally able to hold their own against the previously superior French horse and contribute to break through wins. Perhaps it helped that Der Alte Fritz was busy recruiting cuirassiers like a mad man during the year. Or perhaps, the Prussian cavalry commanders were well schooled by Monsieur Chevert (Protz) in the use and deployment of cavalry during the previous campaign year of 2007. As Patton said, "Rommel, you son of a *** (gun), I read your book!". I learned a lot about the use of cavalry by getting thumped by Monsieur Chevert on a regular basis. The lessons were well learned.
Posted by Der Alte Fritz at 9:59 PM