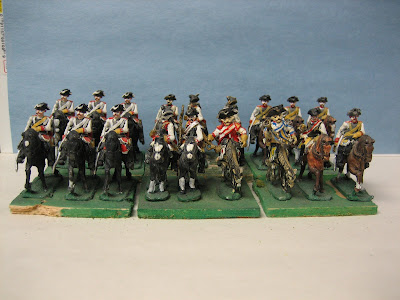 
I acquired twenty of the old Hinchcliffe Austrian SYW cuirassiers at a flea market (that's a Bring and Buy for those of you in the UK) about five or six years ago, with the intention of touching them up with paint and improving their appearance. As you can see in the picture above, the paint job is not up to standard and the figures needed a lot of work. When I bought them, I thought that maybe I could repaint the faces and leave them at that.

But you know how that usually turns out, right? First I touched up the faces, then the black equipment, then the shabraques, and so on and so forth. Before I knew it, I had repainted everything except the horse color on the figure. A side by side comparison of the "before" and "after" figures is shown below. 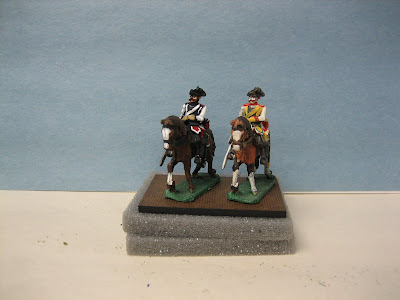 
I tried to keep the original horse painting intact, although in the figure above, I repainted the white blaze on the horse's nose and painted all the tack equipment black. This brought the horse up to an average "wargaming standard". The trooper and shabraque has been completely repainted in this example.

After examing the rest of the regiment, I decided that the horses were so bad that I had do a total repaint. And so what started out as merely "touching up the figure" turned into a total repaint of the horse and figure. So basically, the figures amounted to nothing more than a "primed" figure. I had to completely cover the horse and rider with black acrylic paint and start all over. I worked on these over the weekend and have the troopers done, but the horses need to be painted. I will post a picture of the first dozen riders within the next couple of days.

I like the Hinchcliffe cavalry figures, the riders more so than the horses, but they look nice in an Old School sort of way. Besides, I was getting tired of painting the nicer Crusader Austrians after recently bringing the regiment up to 60 figures. So going forward, I will have one 60-figure cuirassier regiment of Crusader figures, and one 36-figure Hinchcliffe regiment in my army. Eventually I plan to add another Crusader Austrian cuirassier regiment. But for now, I sort of like the variety and the challenge of painting different figures.
Posted by Der Alte Fritz at 8:40 PM