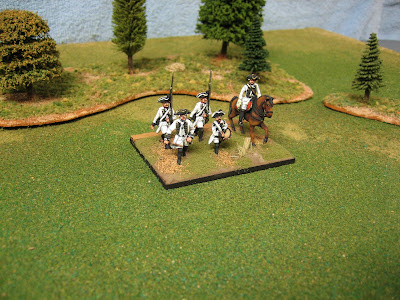 RSM figures comprising the Salm Regt command stand (for a different set of rules other than BAR).


I don't have any current pictures of the Austrian cuirassiers in my digital library, so I posted these RSM figures that I painted for a friend last Christmas. I will try to take some new pictures, including the Austrian camp scene that I have, and post them this week. My goal for the rest of the month is to post at least one entry each day so as to hit 100 posts for the year.


Austrian Cuirassiers
I made good progress on my Birkenfeld Cuirassiers over the weekend, having completed a squadron of 12 figures and blocking in the basic white, red and flesh colors on the next squadron. Once the second batch of cavalrymen are completed, probably later this week, that will bring the Birkenfeld regiment up to its full complement of 60 figures.

The Austrians will need a second cuirassier regiment in the near future, so my choice will be the Alt-Modena regiment. This has the distinction of being the only Austrian cuirassier regiment that has blue cuffs (i.e. it is the only regiment that does not have red cuffs). That ought to make it easier to identify the two regiments on the table top. My choice of figures will be the Crusader SYW Austrian cuirassiers. I do have about 20 old Hinchcliffe Austrians that I bought in a flea market. It has been my intention to repaint these figures as the paint job is not quite up to my standards.

Austrian Dragoons
I currently have one regiment of 48 de Ligne Dragoons in my Austrian army and 12 more unpainted castings in the Closet O' Lead waiting their turn to be painted. This will be the next unit to hit the painting table after the Birkenfeld Cuirassiers are completed. Somewhere down the road, I would like to add a regiment of red coated dragoons to represent the Saxe-Gotha dragoons in Austrian service. I have already painted the horse grenadier squadron for this regiment (see picture from a couple of days ago on this blog).

The Infantry
I set up all of my figures on the wargame table this evening and counted 8 line battalions and a converged group of 72 Croats comprising the nineth battalion. This is enough to do the Charles Grant Lobositz scenario if I split the Croats into two battalions of 36 figures. After I build up the cavalry, I have a battalion of Hungarians - Nikolas Esterhazy Regiment (there are those nasty Esterhazys again) ready for painting. This lads have done quite a bit of traveling over the past year. I primed them and started on them about a year ago. Then I mailed them to Lexington, KY so that someone else could paint the figures. Then they were sent back to me when my painter burned out, and now they are back on my painting table. We will have to see if the perfidious Esterhazys ever get painted.

I think that I will upsize all of my Austrian battalions from 54 to 60 figures. Some of them are already at the new strength, so I am only looking to upgrade maybe 4 of my 8 line battalions. Multiples of 20 figures seem to work better in the BAR rules.

The Artillery
I currently have one 12-pounder and four 6-pounders plus the full complement of crew and limbers. Guns don't get on the table unless they have limbers. The exception goes to regimental guns which are light enough to be man handled. I can see adding another 12-pounder and crew to the mix for the time being and maybe some regimental guns. I noticed that I have about 8 of the Berlin Zinnfiguren store Austrian artillery with limbers. These are too nice not to get painted, so they will get into the que at some point in time.
Posted by Der Alte Fritz at 12:24 AM