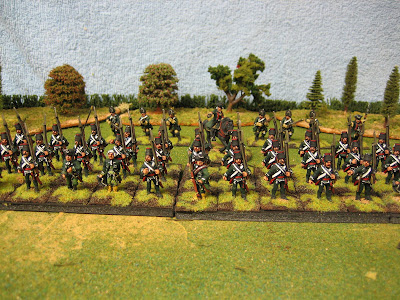 
I haven't had much in the way of free time to blog over the past several weeks, because I've been a paintin' fool feverishly trying to get my Von Kliest Freikorps finished in time for our winter kleine krieg game this past weekend, on December 6th. I will post more pictures over the next couple of days, both of our game on Saturday, and of my freikorps additions and more of Milady de Winter's Black Legion.

I was able to field a mixed force of 36 horse grenadiers, 12 hussars, 60 Grun Kroaten infantry, 12 jagers and two sections of 6-pounder von Kliest artillery and 10 crew. I also bumped the Black Legion up from 23 figures to 45 figures within the past week, as well as an assortment of mounted officers. Mrs. Fritz hinted that I should hide my paint brushes after Saturday's game, because I probably wasn't going to be doing much painting for the rest of the month. Fair enough, given that I admittedly overdid the painting blitz in order to get ready for the game. 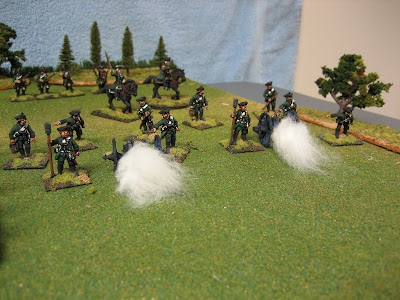 Eventually, I will add a couple more squadrons of horse grenadiers to get the unit up to 48 or 60 figures, add another squadron of hussars to get that unit up to 24 figures, and maybe down the road, I might add some von Kliest uhlans. 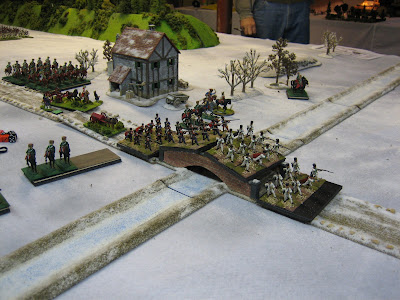 Here is a preview of the kleine krieg game that we played on Saturday December 6th at Brown Deer, Wisconsin. Here we see a hoard of RSM Croats crossing the Apfelwasser spanned by an HG Walls bridge. Mr. Walls also built the road and frozen river sections, the winter trees, and the snow covered building in the background. 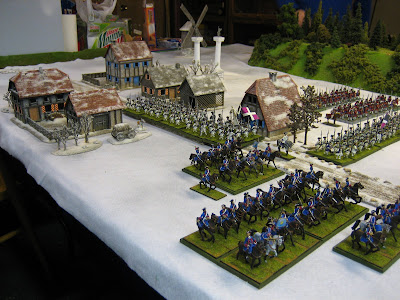 A view of the French army as it marches through the town of Bettendorf towards the Apfelwasser. They could only cross over the bridge or at one of the two fords over the stream. These served as choke points that were well defended by the Prussian frei battalions. Virtually all of the troops in this game were low quality trained or poor troops, albeit with a smattering of veteran grenadiers and the elite Black Hussars (whose eliteness did little to prevent them from being shot out of their saddles by the Fischer light infantry of the French).
Posted by Der Alte Fritz at 12:03 AM